There are no broad roads leading to the monasteries in the Central Balkan National Park. You might drive past them for years without knowing it, until one day fortuity, or curiosity, a glance at a beautiful landscape or an invitation from a friend might cause you to swerve from the beaten track and follow a narrow mountain road, leading up to a world altogether different.

And that includes a scenic route traversing some of the most beautiful parts in Northern Bulgaria – lying between the sea of hills and forests of the Balkan range and the lands to the north of it - the Central Balkan National Park. There are seven monasteries here – Glozhene, Troyan, Novo Selo, the Batoshevo monastery and nunnery, Sokolski and Dryanovo monastery. And if you have some time on your hands, you can also include the Etura ethnographic complex near Gabrovo, the Bacho Kiro cave and the eco-trail overlooking the monastery of Dryanovo. But the real beginning of this journey back in time starts in the town of Yablanitsa, though not necessarily because of the delicious Turkish delight or halva to be found there. Yablanitsa is where the road leading to Maluk Izvor village starts, and that is where the detour to the first monastery is – Glozhene monastery, located in the Northern portion of the Balkan range. Legend has it that the monastery was built in the 13th century by Ukrainian Prince George Glozh with the blessing of Bulgarian tsar Ivan Asen II. This monastery has given sanctuary to Bulgaria’s national hero Vassil Levski, the Apostle of Freedom, on more than one occasion, and after the country’s liberation from Ottoman rule in 1878, it was the place where prominent Bulgarian man of letters Vassil Drumev was banished. The monastery can only be reached by car or on foot. It is said that he who has been able to reach it is halfway to becoming a Hadji (pilgrims who have been to Jerusalem add the prefix Hadji to their family name), though nobody knows whether you will be a full Hadji if you go up to the monastery twice. And when you enter it, you realize that you are standing on top of the rock. The only thing that can be seen from the inside is the opening to the pathway leading down to the Apostle’s hideout, and looking out to the rocks, it is as if you are hanging in mid-air. The big surprise along this trail on the way to the monastery of Novo Selo, are the small streets in the town of Apriltsi. This is the first monastery built during the time of the National Revival (18th – 19th century), most of the others go far back in time, long before this period in the country’s history. The monastery of Novo Selo is located in a neighbourhood of Apriltsi called Novo Selo – hence the name – and was constructed in the 19th century by local notables. As a matter of fact, it was the daughters of some of these prominent locals that were to become the first nuns at the cloister. Though it has but a brief history, it is, nonetheless bitter, because the building of this monastery was at the centre of the fighting during the 1876 April uprising against Ottoman domination. In the course of nine days, Bulgarian rule was established here and the Novo Selo Republic proclaimed. In our day the cloister is like a piece of heaven – a beautiful garden with a water fountain out front, four spruce trees which seem to be growing right out of the church walls imbuing the view with a special kind of atmosphere. Above a neighbourhood called Ostrets in the outskirts of Apriltsi, the road once again starts to climb, bringing you face to face with the highest peak in the Balkan Range – Botev, 2,376 m. If you make a stopover on the way, you can take your picture at “Lions’ bridge” in Selishte village. Being a village up in the mountain, this bridge is narrower than its namesake in Sofia and it has just two lions, but they are as lifelike as they come. After the bridge we head for the men’s monastery of Batoshevo, some 10 kilometres away in the folds of the mountain. This monastery was founded in the 13th century by the Bulgarian Patriarch during the reign of Tsar Michael II Assen (1246-1256). At the time of the National Revival it was here that one of the first secular monastery schools was founded, attended by Matey Preobrazhenski and Bacho Kiro Petkov. There is a Batoshevo nunnery in the village called Batoshevo which this route passes through. Finally, we reach Sokolski monastery overlooking Etura ethnographic village, some 15 kilometres to the Southeast of Gabrovo in a locality called Sokolova Cave. Its name is derived from the name of this locality, but also from the name of the man who founded it and was its first abbot – Archimandrite Yosif Sokolski. The first thing that meets the eye here is its beautiful garden, and in the middle, an almost circular water fount put up by legendary master-builder Kolyu Ficheto. It has eight spouts, all shaped like falcons. If you look into the water you will see the coins visitors throw, so they may, one day, come back here. This fountain is, in itself, singular architecturally and structurally – instead of having a church in the centre of the monastery yard, as is the canon, here, it is the fountain with the falcons that stands dead centre. The church is a little further down, on a platform that is slightly lower. Its frescoes – on the outside and inside – are the work of master-painters from the village of Shipka and were made one and a half centuries ago. Data indicate that on this same spot, during the Second Bulgarian Kingdom (1185-1396), there rose a rock monastery. Small wonder then that another monastery was built in the same location. 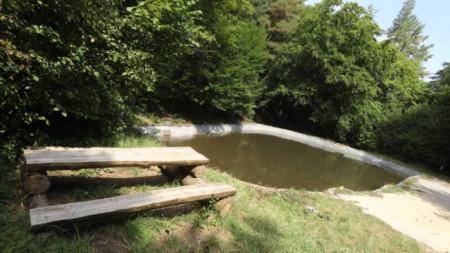 Tons of silt and waste have been removed from the four Simeonovo lakes, which turned this area at the foot of Vitosha Mountain into a pleasant place for relaxation and coolness in the height of summer. One of the symbols of the capital's Simeonovo.. 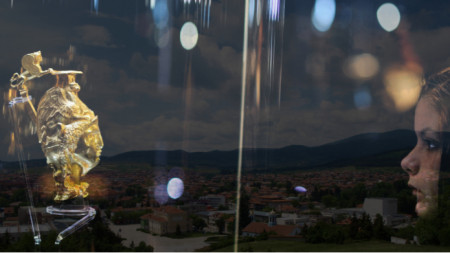 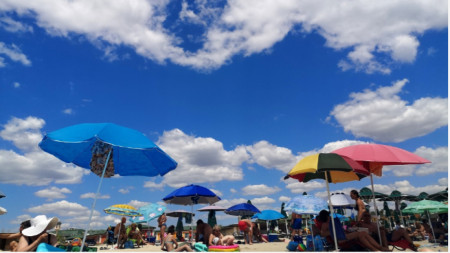