Writer Zachary Karabashliev: The only war worth fighting anymore is the war on ignorance 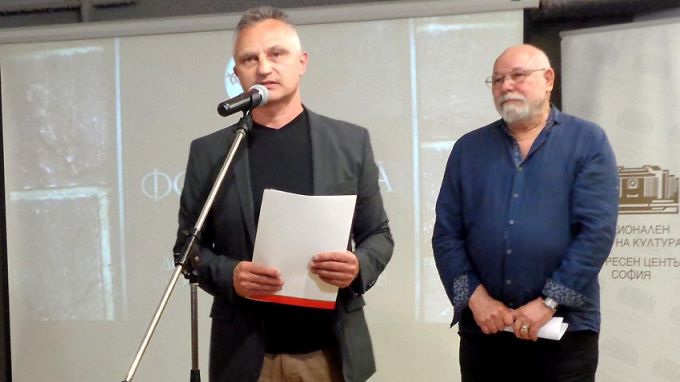 The National Endowment Fund “13 Centuries Bulgaria” has announced the nominations and the National Literature Award for Bulgarian Novel of the Year. The ceremony was held at the National Palace of Culture in Sofia.

Chairman of the jury was famous writer Vladimir Zarev. In his speech he stated Bulgarian novels are developing into truly epic reading matter with a powerful storyline, vivid characters, competently etching out the problems of the day:

“The epic genre which requires time, dedication, colourful language, storytelling skills has been gathering experience, conquering more and more territory from the realm of modern literature. The novel is, without doubt, among the most fascinating and sought-after kind of book. The fact that memorable titles have been appearing that have been enormously successful comes to prove this is so,” said Vladimir Zarev. The prize went to Zachary Karabashliev’s “Havra”, an original novel with two storylines. The first traces is played out in our day and traces the life of a young Bulgarian who returns from America for his father’s funeral. But his brief stay entangles him in a mesh of dark interests. Here is Zachary Karabashliev about his book and the problems of the times we live in:

The other storyline in the novel unfolds almost 150 years ago, and it is a love story between a Russian aristocrat and an American journalist, whose prototype is JanuariusMacGahan, the journalist who, in 1876-1877 wrote heartrending accounts of the April uprising in Bulgaria and the Russo-Turkish war of liberation. But why did the writer choose to write about times long gone by? Is there something missing in the times we live in now?

“What we are missing is a grand cause, something it is easy to fight for. Now, we have lots of small causes, lots of small things which have been sapping our energy.”

The jury considered 34 novels, nominating 6 on diverse topics. Vladimir Zarev says that any one of them could have come out winner, adding that the other novel the jury deliberated on most was Milen Ruskov’s “Chamkoria”. The story in this novel again takes us back in time, to the 1920s in Bulgaria, a time of coup d’etats, revolts, horrifying terrorist acts and assassinations.

The nominations included “Invisible” – a novel by Natalia Deleva, a Bulgarian writer living in Great Britain and writing in Bulgarian.

“It is a book about the invisible people, about all those that we sometimes neglectfully, haughtily even pass by without even noticing…,” said journalist Mitko Novakov who presented the book.

Angel Igov’s “Fine particulate matter” is another book with a story set in modern times. “I wanted to write a book about our life here and now, about the things around us, about the things we breathe, literally and metaphorically,” says the author.

Serious but with satirical overtones – that is how the book by young writer Petar Krumov - “A hearse, two rhinos” – can be described. Ianitza Radeva’s “The Way to Thebes” offers a different look at thbetween of a couple in our day, making Oedipus as much a modern as he is an ancient character. 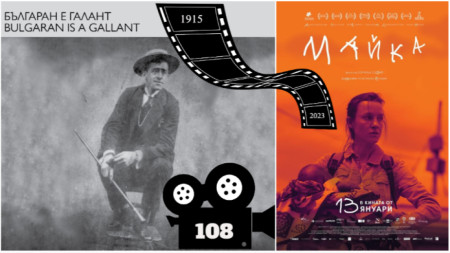 Today, January 13, we celebrate the Day of Bulgarian Cinema and the professional holiday of everyone involved in film production in Bulgaria . The date is related to the premiere in 1915 of the first Bulgarian feature film entitled “Balgaran e.. 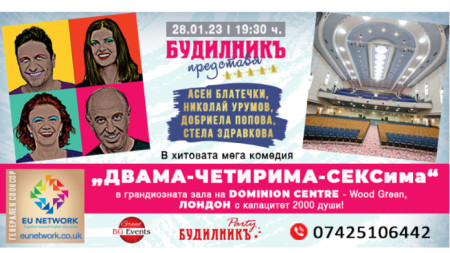 On January 28, Bulgarian actors Asen Blatechki and Nikolay Urumov will visit London with the performance "Dvama, chetirima, sexy-ma", of which the actors are also directors, the website Budilnik reports. They will be partnered by the actresses Dobriela.. 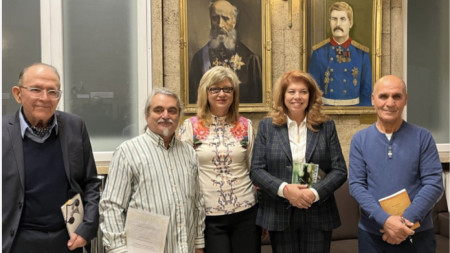