Secrets of Lozenets quarter in Sofia "Some compare it to Montmartre in Paris, but to me it looks like Mala Strana in Prague. If someone wanted to tell a foreigner in Sofia more about the history of Bulgarian art and literature from the beginning of the twentieth century, they could take him or her across the small streets of the lower parts of Lozenets. They are like an encyclopedia as it is enough to know the stories and names of the people who lived in the houses there…" This is how Magdalena Gigova, a journalist, writer, traveler, photographer and researcher of forgotten or unknown stories about famous Bulgarians, starts her narrative about the secrets of the Sofia quarter of Lozenets. Many people know that in the prestigious quarter, which ranks among the most luxurious and preferred places to live in Sofia, hides stories enough for several novels. Its building started with a decision of the government and the Sofia Municipality in the distant 1921. Intellectuals and retired military were given building plots of 550sq.m. in the area of Kurubaglar (meaning “dry vineyards” in Turkish). Back then the area was part of the so-called “third sub-urban area” where there were no water supply and sewerage system. It was in 1928 when thanks to Engineer Nikola Seliminski, water supply network was built. In order to have enough green space, the owners of plots were obliged to build not more than 250 sq. m. of the plot. The architectural plan of the quarter was made in 1920 by architects and engineers with European education. There were no warehouses and workshops in the so-called Journalist Area (around today's Journalist Square), which made it a very pleasant and quiet place to live. In the period 1920-1938 neat buildings with beautiful gardens, designed by famous architects such as Georgi Ovcharov and Yordan Milanov were built there. Everyone wanted to express his own style and not to repeat what other had already done. That is why there is a lot of beauty in Lozenets – stone bas-reliefs, carvings, interesting balconies, windows with unusual shapes, etc., Magdalena Gigova says.

In the former Mosul Street, now called Arch. Yordan Milanov Str., there used to be the garden of Anton Kraus, a gardener to the royal family and a renowned consultant when shaping gardens was concerned. The first settlers in the neighborhood were writer Elin Pelin and actor Krastyo Sarafov. The house of Elin Pelin is located at the foot of the hill, where the Seminary rises. Renowned intellectuals – writers, actors, and professors used to be frequent guests there. Often, in front of the door of the writer's modest home, Tsar Boris III appeared alone, without a guard, Magdalena Gigova says and adds:

“A foreigner may not know who Elin Pelin was, but when you take them to the ‘Pod Lipite’ pub (Under the Linden Trees), it is the right place to tell them the story of how the writer became godfather of this restaurant. Famous Bulgarian writers and artists used to gather there. Its owner was General Stefan Tasev, retired officer after the Treaty of Neuilly.”

If weather is suitable for walks, it is enough to follow the memorial plaques to start immersing in the secrets of Lozenets from the beginning of the last century.

"And if one wanted to dig in the love stories of the quarter – they have no end," Magdalena says smiling. One of them is the romantic affair of famous poetess Dora Gabe and poet Peyo Yavorov, who used to meet in the mansard room of the restaurant. In addition to their strong love, they shared common values ​​and interests, and if it was not for the intervention of malevolent people, the fate of the beloved Bulgarian poet would probably had turned in a different path.

In 1925 in the Journalist Quarter, historian of Bulgarian journalism, Georgi Nikolov, and his wife from Italy, Eliza, opened the first dog and cat shelter in this country. Their home was visited by Kemal Ataturk, who was in love with their daughter's friend Mara-Miti Kovacheva.

Among the residents of Lozenets from the previous century we also see the names of composer Parashkev Hadzhiev, opera prima Ilka Popova, who conquered the Paris Grand Opera and La Scala in Milan, but also the heart of Shaliapin. The story of actress Irina Maleeva is also an interesting one:

“This is the only Bulgarian woman staring in four Fellini films. When she was 15, she went to study painting in Rome where she met the great Italian director. Irina is the only person painted by the famous Austrian artist Hundertwasser in his ‘Irinaland over the Balkans’.”

In order to end her story about Lozenets, Magdalena told us another secret – the so-called Roman Wall, where the quarter market is situated was actually not build by the Romans but is a religious Ottoman monument from the 16th century. The most acceptable theory is that the wall is a tombstone of a prominent figure, erected in the Turkish cemeteries that existed in this area before the Liberation in 1878. According to other information, the wall is part of a place where the hodja served a prayer for those who were leaving for the Hajj. Next to the wall there were large stones placed and pilgrims stepped on them before climbing on the backs of their horses. 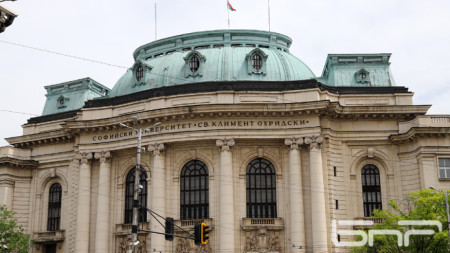 November 27, 1919 is a sad date for Bulgaria. On this day, a peace treaty was signed in the Paris suburb of Neuilly-sur-Seine, imposed on..