Peyo Peev about his new album and the important professional meetings Meetings (Sreshti) is the name of the second single album of Bulgaria’s renowned rebec-player Peyo Peev who is also a soloist of the Bulgarian National Radio Folk Orchestra. Peyo Peev is a brilliant musician, but he is also a talented composer and arranger. In the recent years has been lecturing at the Academy of Music, Dance and Fine Arts in Plovdiv.

I wanted to select my best pieces of the past 10 years. I truly believe that the CD contains the best music. To my delight, many wonderful musicians took part in those pieces. As for the title (Meeting), it tells us how the CD was made, the Bulgarian musician told Radio Bulgaria.

"In the beginning, Theodosii Spassov persuaded me to make an album. Then I met with all musicians to discuss with them which pieces to include in the new album. We spent a lot of time in the studio with sound engineers Victor Yordanov and Todor Chorbov before we reached this wonderful sounding. Then I met with Ivo Hristov who shaped the beautiful design. I also want to thank all people involved in this endeavor- singers Teodora Stambolieva, Svetla Dukateva, Vanya Valkova, Tanya Hristozova, Miglena Nikolova and Iliana Georgieva. Angel Zhekov, Temelko Ivanov, Nikolay Georgiev, Nedko Bogdanov, Kostadin Kostov, Lyre Orchestra and Riko Band also took part in the project. I cannot name everyone involved in making the album, but they all know that I appreciate them highly as professionals and friends." Some of the pieces in the album have never been performed live, but most of them are part of the music repertoire of the celebrated Bulgarian musician. They are played at concerts, music clubs and broadcasted on the TV. Peyo told Radio Bulgaria that he often plays with Stoyan Yankoulov who also participates in the album, as well as with one of Bulgaria’s most renowned accordionists Petar Ralchev whom he truly admires:

"I have worked with Petar Ralchev for many years. I am a big fan of him from a very early age. It is great honor and privilege to work with him. In this album (Meetings) we perform together the piece Darakchiyska Rachenitsa which was included in my first album as well. I did not like the music arrangement of the song and I made some changes before I included it in the second album."

Like many folk musicians Peyo was also part of wedding orchestras. He still receives invitations to play at weddings, because this tradition is still alive in many Bulgarian regions. Weddings usually last for 18 hours-from early morning until midnight, Payo says further. That is why he has prepared a big repertoire. When he was still a child he joined his father’s orchestra where his dad played on the saxophone. Later, he worked with many wedding bands. He joined the Zagorche Ensemble in his home town of Stara Zagora and later graduated from the National School for Folk Arts Filip Kutev in Kotel and the Academy of Music, Dance and Fine Arts in Plovdiv. He is grateful to all his lecturers, including Mariana Peneva and Stepan Chervenkov. His acquaintance with Theodosii Spassov was crucial, because the renowned Bulgarian kaval player has perhaps the greatest influence on his musical thinking. He played together with Theodosii Spassov for nearly 15 years in various music formations in many countries.

"Currently I am preparing an interesting project with jazz pianist Miroslav Turiyski. We may record it later if we like it, the Bulgarian rebec-player says. The young folk musicians like jazz. Their colleagues- the jazz musicians listen to folklore music a lot and we look for an interconnection in what we do. I took part in the first CD album of Bulgarian jazz musician Vlado Karparov who lives in Germany. He also participated in my album. We are like-minded and I am happy that I know him. I can say the same about Mitko Lyolev who is saxophonist at the BNR Big Band. One year ago we recorded Riverdance’s new album. I participated in over 140 shows of the world famous formation. I also took part in Jordi Savall’s project. Nedyalko Nedyalkov (kaval) also plays in that formation. I recorded 3 or 4 albums with Theodosii Spassov. I also write music for the Bulgarian National Radio Folk Orchestra", Peyo Peev said. March 1 st is a day much loved by all Bulgarians - the day we give each other martenitsas. These red and white amulets for health are yet another sign - the Day of the Amateur Artists in Bulgaria has come. Founded with this name in 1976 by a decision.. 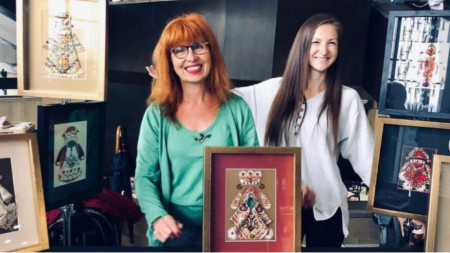 March 1 st is a day much loved by all Bulgarians - the day we give each other martenitsas. These red and white amulets for health are yet another sign -..