Does the end of the state of emergency in Bulgaria hide risks?

Immunologist Acad. Bogdan Petrunov for Radio Bulgaria: The measures taken in our country were the most correct May 13th is the last day of the state of emergency declared in Bulgaria two months ago to curb the spread of Covid-19 in the country. Then, in an interview with Radio Bulgaria, one of the leading immunologists here, Acad. Bogdan Petrunov, defined the measures against the epidemic as timely and adequate. To what extent did these restrictions play a role in protecting the Bulgarian population? Against the background of the contradictory social attitudes and the theory of "herd immunity", what is the final conclusion in the eyes of the immunologist: "Here we see two opposing tendencies. One is to let people move without restrictions, they gradually get sick and some die, and it comes to survival. It is absurd to think that way. I immediately give the example of Sweden, which is highly developed economically, with a stable health system and did not take restrictive measures. Now, however, according to the latest data of the WHO (from May 11th) it is in one of the first places in terms of mortality and morbidity with 12% fatalities. Worldwide mortality is over 5%, in Italy and Spain it reaches 14 -15%. This shows that this model of allowing the disease to develop without any restrictions leads to an increase in mortality. In this sense, I am convinced that the measures taken in our country were the most correct. This is the other trend we must follow - to limit our contacts in order to slow down the development of morbidity. That is why I am quite reticent about relaxing the measures. The opening of the parks is correct, it is good to walk in the mountains, but everything else should be done gradually and with a daily assessment of the epidemic level.“

We can talk about a real control of the pandemic only in the presence of a quality vaccine or effective remedies. So far, there is only work under way for developing a vaccineand it has not gone through the testing phases. Without proving its safety and anti-epidemic effectiveness, it cannot be recognized by the world institutions involved in their certification (the US Food and Drug Administration and the European Medicines Agency). The current SARS-CoV 2 virus differs by about 25% from that of SARS-CoV (SARS), which originated in 2002, which means that its variability will continue, albeit more slowly. Therefore, if a vaccine is created, it will not be final. "Even if we assume that the best vaccine is found, the mechanism by which it will create immunity is not fully clarified," Acad. Petrunov firmlystates, adding:

"It is not yet proven how building antibodies can protect people. So far, the antibodies only prove that you already contracted the virus in the past. In addition, the vaccine produces antibodies not only in bodily fluids but also at the cellular level. However, we know very little about how the vaccine will stimulate cellular immunity and whether it will be the leading one. The same goes for medicines. It's great that our team has developed molecules that could be successfully applied in the treatment, but to say in advance that we have a drug is not serious."

According to a study by American scientists, in the countries of Eastern Europe, where immunization with BCG continues, there are fewer deaths than in Western European countries, which have stopped using it. The vaccine has been produced in Bulgaria since 1953and is currently exported to over 100 countries. According to Acad. Petrunov, the Bulgarian BCG vaccine is among the best in the world. A little-known fact is that the Italian professor Vittorio Colizzi (who helped liberate the Bulgarian medics from Libya) wanted to develop a joint vaccine against AIDS and hepatitis, based on the Bulgarian BCG vaccine, which has a strengthening effect. In addition, the Bulgarian vaccine has been scientifically proven to be among the most powerful stimulators of cellular immunity. Its action inhibits not only the development of pathogens, but also of tumor cells, explains Acad. Petrunov. In this regard, the immunologist explicitly emphasized that the strengthening of immunity as a prevention is done only in healthy people. In “Bulgaria Today” on Tuesday, July 27 th we bring you first the latest news stories from this country. Next on the show, we tell you more about an interesting exhibition in the town of Samokov. At the end, we bring you some new.. 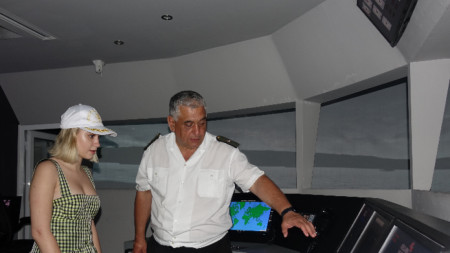 In Varna, the Oscar-nominated Bulgarian actress Maria Bakalova became the godmother of the first Bulgarian military research ship . It is named after the holy brothers Cyril and Methodius. The ship is owned by a consortium between the Naval School, Sofia..

For the first time, Bulgarian children talked live with astronauts aboard the International Space Station . After a special selection, 32 students from across the country were approved to pose questions to the astronauts who live and work in outer space...

Shortage of doctors and nurses – a chronic problem in healthcare

More than 500 medical workers leave Bulgaria every year. With the start of the Covid crisis and the strain on the healthcare system, the shortage..

For the first time, Bulgarian children talked live with astronauts aboard the International Space Station . After a special selection, 32 students from..

Boyan is a 15-year-old adolescent from Sofia, one of those who grow up and manage to cope in life despite having the Down syndrome. He has..