In 1948 Bulgaria refusedto send teachers for the Bulgarian community in Albania, which was subsequently subjected to Macedonization. Assoc. Prof. Spas Tashev reveals such little-known facts in the newly printed first book of his research - “Bulgarian communities in the Western Balkans. Political processes and ethnic-demographic consequences (1913-2019).” The scientist follows the ethnic-demographic processes in more than 30 settlements in Albania, where people communicate in an archaic Bulgarian dialect.

After the end of the Second World War and the change of regimes, the Bulgarian state missed a historical chance to establish the Bulgarian literary language in Bulgarian-inhabited Albania. The government wasted two opportunities in a time when the Yugoslavian emissaries were trying to tear off Pirin Macedonia from Bulgaria and annex Albania as the seventh republic of their own country.

“As extraordinary as it may sound, the first resistance in the Balkans against such Yugoslavian politics came from Albania, when Enver Hodzha, the head of state, visited Bulgaria in 1947,” explains Assoc. Prof. Spas Tashev from the Institute for Population and Human Studies in the Bulgarian Academy of Sciences. “During an extensive discussion, he proposed that Bulgaria should send teachers to Albania. The Central Committee of the Bulgarian Communist Party responded to the initiative with a year delay, but during that time, the chairman of the committee assigned to discuss the issue at hand – Traycho Kostov - falls into disfavour, due to his conflict with Stalin, and Bulgaria misses its strategic chance to affirm Bulgarian presence and language in Albania.”

According to the historian, sending Bulgarian teachers would have resulted in an alternative to the Macedonization – the introduction of a Macedonian language subject in schools, conducted by Yugoslavia. Such an alternative would have ultimately influenced the Central Balkans at large. The political conjuncture, however, prevailed and Bulgaria’s chance was left unexploited.

In 1955, Albania did once again turn to Bulgaria with a request to send textbooks for the Bulgarian population. But again to no avail, as the government overlooked this opportunity for opposing the attempts of the ethnic transformation of the Bulgarians on these lands.Then, on the basis of a Bulgarian Prespa dialect and through a self-sown practice and the official Bulgarian alphabet, an original regiolect came along, which was used by the Bulgarians in Albania up until 1991.

According to Assoc. Prof. Spas Tashev, with the establishment of a democratic state in Albania, new processes of gaining self-awareness in the community begin. He is assured that Bulgarians in Albania have never been discriminated against. In 1991, the first Bulgarian associations were registered there, two years later - the first young Bulgarians from Albania arrived here to study in Bulgarian universities. That is when purposeful actions towards official recognition of the Bulgarian minority in Albania began, which were crowned with success in 2017. Today, studying literary Bulgarian language is a priority of the national community in foreign Albania - there are three Bulgarian Sunday schools, and more than 700 young people have graduated from Bulgarian universities.

In the upcoming months, the Bulgarian community will be facing a new obstacle - to protect its ethnic presence in the Albanian census. According to the available data, in the moment there are 50 thousand native Bulgarian speakers in Albania. Nevertheless, whether they would declare themselves as Bulgarians in the surveys is dependent on numerous factors, but most importantly on Bulgarian diplomacy, which has the task of requiring control from the Albanian authorities with the purpose of hindering any attempts to replace the national identity of Bulgarians there.

A national folklore festival is taking place in Avramovo – the highest-altitude railway station in the Balkans. The festival kicked off at midday, when the main trainsets arrive from Septemvri and Dobrinishte along the narrow-gauge track.  The.. The Tatar treasure from the Kaliakra fortress will remain in the architectural complex "The Palace" in Balchik until the end of October, so that tourists can enjoy the exhibits found in 2018. Nearly a thousand objects were once placed in a clay.. 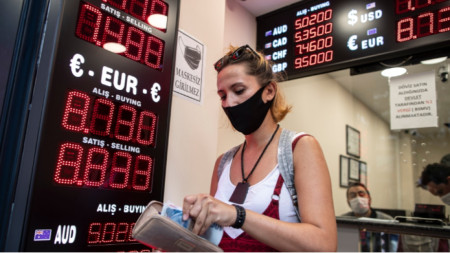 Every day, Bulgarians protest in different parts of the world in solidarity with their compatriots in the homeland, who have been protesting..

Turkish lira depreciated by 19% since the beginning of the year The Turkish lira has dropped to a record low against the US dollar since the..

The Tatar treasure from the Kaliakra fortress will remain in the architectural complex "The Palace" in Balchik until the end of October, so that..