The new season of the Sofia Opera is dedicated to the 130th anniversary of the establishment of the first opera company in Bulgaria. The year was 1890, shortly after Bulgaria’s Liberation from five centuries of Ottoman oppression, when there was still no professional music education in the country, nor even enough Bulgarian instrumentalists and singers.

The formation was part of the Sofia Drama and Opera Company” whose leading figures were Dragomir Kazakov, Ivan Slavkov and Angel Bukoreshtliev. The performances of 12 whole operas and excerpts from 11 operas, with the participation of Bulgarian, Czech and Italian musicians accompanied by piano, the Guards Orchestra, the orchestra of the Sixth Infantry Regiment and the choir of the Italian Singing Society, were received with unexpected success.

Thus, the operatic art made its first steps towards the successful future of Bulgaria which earned a huge recognition in the opera world.

“In the period 1890-1891, the great idea for a Bulgarian Opera House in Sofia was born. This attracted enthusiasts from other cities in the country”, recalls the director of the Sofia Opera, Acad. Plamen Kartalov. “We, the modern people, must look at our glorious past, in which many Bulgarian talents have risen and given their lives and talents to the opera stage - not only in Bulgaria but also abroad. That is why we are dedicating the entire 2020/21 season to this beginning. We will mark it with significant events from the activities of the Sofia Opera. In the new season, classical and modern operas will be performed. We open it on October 9 with Yana’s Nine Brothers by Bulgaria’s Lyubomir Pipkov – an opera that we gladly perform on various stages. We presented the production on the stage of the Bolshoi Theatre and this summer we opened the new festival "Portal of Two Worlds", in the Tsari Mali grad fortress near Sofia dating to the Late Antiquity.

Yana’s Nine Brothers is one of the most emblematic Bulgarian operas. Lyubomir Pipkov worked on it during his studies at the École normale de musique in Paris, graduating in 1937, when he was already working as a vocal pedagogue at the Sofia Opera.

Acad. Plamen Kartalov outlined other highlights in the playbill of the new season of the Sofia Opera.

“For the children's audience, the season also begins with a Bulgarian title – "Lilly and the Magic Pearl ", a musical by Lyubomir Denev based on a work by Valeri Petrov. The season is also dedicated to debuts. We will pay special attention to Bulgarian talents so that they have the opportunity to develop."

According to Acad. Kartalov, now is the time to flexibly get out of the coronavirus crisis, although the Sofia Opera may need to change some (already traditional) guest appearances of foreign artists and conductors: "We are in constant communication with artists from abroad who have already left a mark in the repertoire of the Sofia Opera - conductors Constantin Trinks, Erich Wächter, conductors from Russia, the Czech Republic, England, as well as singers like Catherine Foster, invited specifically to star in Richard Strauss's Electra. But everything seems to be at a frozen point and no one dares to commit, because at the moment the situation is unstable all over the world, for obvious reasons. "

The Bulgarian audience will also be able to enjoy the premiere of Fikret Amirov’s ballet One Thousand and One Nights with choreography by the world-famous pedagogue and ballet dancer Eldar Aliev as well as Tchaikovsky's opera Queen of Spades directed by Vera Petrova. In the forthcoming season there will also be the traditional Wagner Festival as well as the premiere of a Bulgarian opera. 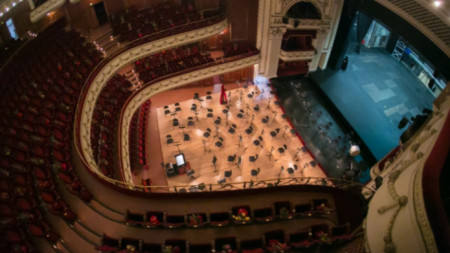 A few days ago, the whole opera world was shocked by the death of the great Bulgarian tenor Kamen Chanev , who passed away in the prime of his..