Bojana Tatarska believes in destiny and follows those small pebbles that take her on her own path. And although today she ranks among the established fashion photographers in the world, she has not lost touch with the young girl with a pair of rough shoes, a large bag and an ink-stained forehead, who was taken by a twist of chance to an audition for models only to enchant with her ease and beauty. At the age of 18, Bojana found herself in the world's fashion capital Paris and soon her face began to adorn the pages of fashion magazines. Famous designers dress her in extremely expensive outfits in their catwalk shows, despite her shorter stature. Thus, her portfolio includes covers of "Vogue", "Elle", "Marie Claire", "Madame Figaro" and participation in fashion shows of fashion gurus such as Paco Rabanne, Issey Miyake, Kenzo, Givenchy.

"I went to Paris in 1997 when Bulgaria was in a strange situation and the whole country was in the grip of some armed gangs and groups," she recalls. “There were terrible stories being told - about fashion models used as a trophy, about how jeep doors open and girls are dragged inside them. Once I arrived at the centre of fashion, I started travelling around the world, learning languages, meeting a lot of people. Of course, I also experienced disappointments, but these were rather those difficult moments that we face at the beginning of each new endeavour."

The glare of the spotlights and the flashes of the photographic cameras follow Bojana wherever she goes around the world. However, she realized that one day the flashlights would go out and started studying Art and Communications at the Sorbonne. Meanwhile, she increasingly reached for the camera, encouraged by a friend photographer. She bought her first camera in Tokyo and used her natural environment of models for inspiration. In 2006, when her life as a model remained a memory, she took her first job as a photographer - a cover of the Portuguese edition of Elle. And a red thread appears in her work, as she calls it, which invariably leads to the theme of death. One of her most significant photographs is of a young woman, whose legs hang from a tall branch, hinting at the impulse for the earthly end, but also at the revival and new beginning.

"Today I have a preference for faces and portraits, because I love meeting the other person, but I experience the same feeling when capturing the image of a stone, a landscape or an apple," says the photographer. “In my work I do not try so much to affirm the image, but rather to witness its otherness, the fact that it is both something familiar and unknown. However, good photography is inexplicable - when an artist begins to become conscious in their work, intensity decreases and art becomes a decoration or a political discourse." At the moment, Bojana Tatarska is completing a project that has remained for centuries a taboo in visual art, which otherwise likes to interpret the naked body - that of the woman who has just given birth. She hopes to complete her endeavor in March in the form of a book and an exhibition.

"Rather, the project explores the state of mind and spirit of the woman who has just given birth," says Bojana Tatarska. “So it is not purely visual and plastic to show the naked body, but it is accompanied by the words of these women. I ask myself why the topic is still regarded as taboo, why there are so many unspoken things. It is very virtuous to place in the lap of a mother who has just given birth her newborn. The question, however, is how she looks at herself - that kind of looking in the mirror through photography, when the child is not there as a protection or an excuse. It is then that a woman comes to the fore as an individual and questions arise as to who she is, how she perceives her own body and sexuality, whether she feels desired or desiring, attractive or attracting”. About the past year marked by obscurity, fear and death, Bojana Tatarska says she has reconnected with her love of photography, as she was able to go hunting for good shots in her favourite Paris without being on a professional assignment. She hopes that during the new year people will show solidarity for each other. "We all have one life and the only beautiful thing we will leave behind is our relationships with other people," she believes. 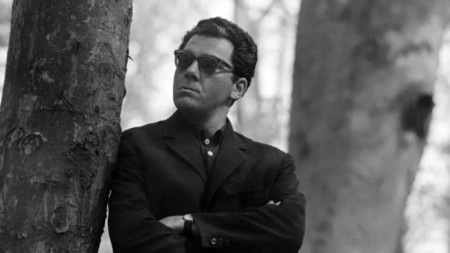