People waiting in line to vote in front of Bulgarian embassy in London
Photo: BGNES

The political party of Bulgarian TV personality and host Slavi Trifonov, “There Is Such a People” (Ima takav narod ITN) has convincingly won the majority of votes of Bulgarian citizens who voted abroad.

According to the data on the website of Bulgaria's Central Election Commission with 100% of the tally sheets procesed, “There Is Such a People” party has won 30.61% of the votes of Bulgarians abroad who voted in the parliamentary elections.
Second is Democratic Bulgaria with 17.57%.
They are followed by:
MRF - 13.28%
GERB-SDS - 8.67%
Vazrazhdane  - 7.39%
BSP for Bulgaria - 6.54%
BNO - 5.26 %
The coalition "Stand up! Thugs Out!" takes 4.23% of the vote abroad.
VMRO took 1.58%.
Listen to the daily news from Bulgaria presented in "Bulgaria Today" podcast, available in Spotify.
Radio Bulgaria News Elections    Bulgarians abroad Democratic Bulgaria elections parliamentary elections Slavi Trifonov Vazrazhdane During the next 24 hours there will be cumulus and cumulonimbus clouds. During the night and in the morning there will be brief showers in many parts of the country, with thunder. In parts of Western and Central Bulgaria the precipitation will be.. The Foreign Ministry of the Republic of North Macedonia has come out with a strong-worded position on hate speech in Bulgarian parliament, and has handed the Bulgarian Foreign Ministry a note verbale. The document reads that Skopje condemns, in.. 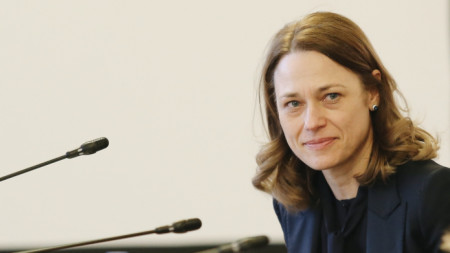 There Is Such a People will try to form a government if it is given a mandate: Iva Miteva

With 170 votes “for”, 36 "against" and 21 abstained, the Bulgarian National Assembly has given the green light to the start of EU accession..

"Today, the Bulgarian parliament took a historic decision by giving a green light to the proposal for EU accession of North Macedonia," Prime..

The Foreign Minister of the Republic of North Macedonia Bujar Osmani stated that today’s vote by Bulgarian parliament for lifting the veto on his..