Is a parliamentary consensus possible for the formation of a new government? The 45th National Assembly officially started its work. There are two brand new parties in parliament, and 117 brand new faces out of the total of 240 MPs. Still, one of the first parliamentary votes garnered an impressive majority. With 163 votes “for” the National Assembly elected the members of its presiding body and its new President Iva Miteva-Rupcheva from There Is Such a People party (ITN). A majority like this, Ivaylo Ditchev, professor of cultural anthropology says, is enough to approve a government. This may sound like a hopeful prospect but is such a turn of events really possible?

Judging by the positions formulated so far by the parties represented in parliament, the coalition GERB-SDS which won the biggest number of seats will most probably be unable to whip up support for a GERB-SDS-proposed cabinet. That is why politicians and political analysts have been turning their attention to the second biggest group in parliament – that of There Is Such a People (ITN). But ITN has kept its silence regarding the presidential exploratory mandate.

Since yesterday a number of analysts have been pointing out that there are no conditions whatsoever for forming a government that could survive a full term of office. Most likely it is going to be short-lived but with a set horizon and concrete aims. According to former MEP and MP Svetoslav Malinov, a government like this would have the following tasks:

“To lead Bulgaria through the crisis, to accelerate the vaccine rollout and to make certain decisions connected with the economic consequences, to submit Bulgaria’s application for European financing under the recovery plan. These are things that can be done before going ahead with new elections,” Svetoslav Malinov says in an interview for BNR-Blagoevgrad. “Election legislation is another thing that should be a natural priority for the government. The other option is, in 5-6 weeks’ time, to see a caretaker cabinet take over and then new elections in summer. I am deeply convinced that the majority of Bulgarian citizens do not want that.”

Though unwanted by many, a caretaker cabinet is a possibility, because the composition of the current National Assembly is not suggestive of sustainability:

“In many ways this parliament copied the structure of the protest movement from the summer of 2020. All of its components found a place in it even though they are so different that it is difficult to imagine them capable of creating a homogeneous amalgam that will work,” says culturologist Prof. Ivaylo Znepolski and explains:

“I would say that the anti-GERB protests consisted of three segments. One was anti-systemic, reflecting the widespread discontent with the way representative democracy has been functioning, a phenomenon that is not confined to Bulgaria. The second segment included people closer to the system who are not happy with the model of governance and are showing it, and who are demanding an institutional overhaul of the country. There is yet another segment consisting of stressed politicians who have been away from power too long and who want to find their way back. There are political “soldiers of fortune” among them from whom all kinds of positions are to be expected depending on when they decide they want to be in the spotlight.”

Hope for change was the driving force in this country and abroad when Bulgarians went to the polls on 4 April. Now the question is – is it attainable in this highly fragmented parliament? Prof. Ivaylo Znepolski takes a look at the idea of “change” from a different angle:

“Nobody knows what the word actually implies. The nation is structured in different social strata. Each of these strata has its own idea of what it wants to happen for things to get better. So, the word “change” is more of an abstraction that is not supported by any particular political vision.”

Former MP Peter Slavov is not an optimist either when it comes to how long this parliament will survive. But he is hoping that the bids for emergency repairs of the Election Code made by different parliamentary groups will make it possible to attain consensus albeit on this one subject. He is adamant that the practice of copying the machine vote results onto a summary tally sheet must be scrapped. Another amendment is connected with the introduction of distance voting which is essential for Bulgarians living in other countries but also for voters in the country, especially persons placed under quarantine.

“Such changes, made summarily, will make elections fairer and more representational. As to any more serious changes in the sphere of the judiciary, we are yet to see whether the bids for support from one political party or another for what was until recently the out-of-parliament opposition will be translated into concrete action.” 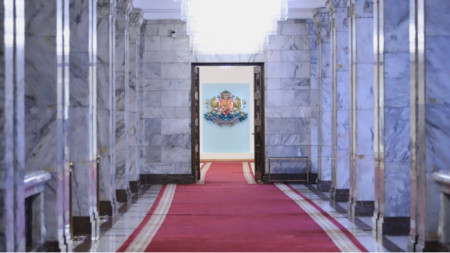 A new move on the political board has set off new probability theories in the political game of cabinet formation. Even before President Rumen Radev has had the chance of announcing when he would be handing an exploratory mandate for the..