At the end of parliament’s first workday – 15 April – the government press service announced that the Council of Ministers was dissolving the National Operational Headquarters for combatting the pandemic. The decision was made public without any motives or any concrete information on how coordination of the efforts to check the spread of Covid-19 would be affected. The news of the Headquarters’ dissolution caused bewilderment among health experts who hastened to point out that whatever the political situation in the country there has to be a coordinating body. They all agreed that the situation calls for the National Operational Headquarters to continue its work.

Three days later outgoing Prime Minister Boyko Borissov announced, at a briefing at GERB headquarters, that he had given instructions for the National Coronavirus Operational Headquarters to be reinstated, explaining that its dissolution had come in consequence of the resignation of the government. Health Minister Kostadin Angelov on his part explained that the Headquarters had been set up as an advisory body with the prime minister to coordinate the actions of the institutions. On his part, PM Borissov suggested that the newly elected chair of the National Assembly’s healthcare committee pulmonologist Dr. Alexander Simidchiev should head the headquarters so he may “give the cabinet ministers instructions until the time a new government is elected.” But no written order to disband or to reinstate the National Operational Headquarters was ever issued.

“Unquestionably, we need a central coordinating body to keep the pandemic in check,” Dr. Alexander Simidchiev commented for BNR’s Radio-Plovdiv. “Whether it will be a National Operational Headquarters or some other body, according to Bulgaria’s pandemic plan there has to be a committee to coordinate all activities connected with the coronavirus. Until the time it was dissolved, the Headquarters was indeed the body that collected information, processed it and made decisions based on clear and concrete data. What worried me is how these data will be stored and transferred to a new structure.” The newly elected chair of the parliamentary healthcare committee says that the best thing to do is for the now existing pandemic headquarters to continue to function. All the more so that virologists and epidemiologists have been warning that the easing of restrictions could trigger a new wave of the virus around Easter time.

“If we go about setting up a different body now that would mean transferring responsibilities as well as data within a very short space of time,” Dr. Simidchiev says. “If a new government is formed the entire information has to be transferred to the new structure along with all responsibilities.”

Chief State Health Inspector Dr. Angel Kunchev was also adamant: “there must be a coordinating body in the fight against Covid-19 because the epidemic process continues and decisions have to be made.”

“Who better to advise politicians than specialists with expertise,” former health minister Ilko Semerdjiev said in an interview for the BNR’s Horizont channel. “Politicians make the decisions, the Headquarters provide the expertise. The decisions are made by the person who is responsible. Inasmuch as there is going to be a change of administration, there will probably be a change in the composition of the Headquarters.”

The responsibility for managing the pandemic crisis falls to the minister of health who issues the orders connected with the anti-Covid measures, something that was confirmed by outgoing Health Minister Prof. Kostadin Angelov who assured the MPs from the 45th National Assembly that the state administration was coping with the third wave of the pandemic.

Election fatigue is evident among Bulgarians in Berlin and Dusseldorf

Low voter turnout, provoked by voter fatigue, and by the fact that October 3 is a national holiday in Germany . In this context, the election day is passing in the country where one of the largest Bulgarian communities in the world lives. Radio.. Many of us still remember the long queues that formed in the British capital during last year's first parliamentary elections. Similar activity is observed there today, as there are also many Bulgarians who went to the polling stations for the first.. 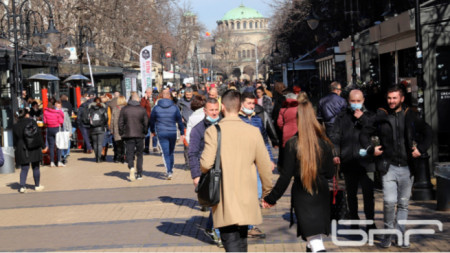