On May 11, Bulgarians pay homage to Saint Cyril and Saint Methodius

Today the Bulgarian Orthodox Church celebrates the day of the Holy Equal-to-the-Apostles and Illuminators Cyril and Methodius, the creators and distributors of the Slavic alphabet - the Glagolitic alphabet.

In recognition of the apostolic and cultural work that the two educators carried out on the Old Continent, they were proclaimed co-patrons of Europe (along with St. Benedict) by Pope John Paul II on December 31, 1980.

It was precisely in Rome that the Thessalonian brothers Cyril and Methodius carried out their cultural revolution, destroying the myth of the sacred languages ​​for preaching the New Testament (Latin, Greek and Hebrew) and paving the way for Christian education - not only for the Slavs but for all medieval peoples. That is why in iconography they are invariably depicted as men of letters and educators, holding a scroll with the alphabet they created. Today, their name symbolizes the spiritual bridge between Eastern and Western Christian traditions, as well as the cultural unity of Europe.

Its history dates back to the era of the Bulgarian National Revival period, when on May 11, 1851 in the diocesan school of St. St. Cyril and Methodius in Plovdiv on the initiative of Naiden Gerov, a feast was of the Thessalonian brothers. The first written records about the celebration of the holiday can be found in the "Reader of the Slavic Language" (Hristomatiya slavyanskovo yazika) from 1852 by Neofit Rilski. In 1857 the feast was marked in the Bulgarian church "St. Stephen" in Constantinople, along with a service for St. Ivan Rilski. A year later, this date was celebrated in Plovdiv, followed by Shumen and Lom in 1860, Skopje in 1862 and Varna in 1863.

May 11 is the common church feast of the two saints. After the introduction of the Gregorian calendar in Bulgaria in 1916, the holiday began to be celebrated on May 24 according to the official state calendar, and according to the church liturgical calendar the day of the feast remains May 11.

On the eve of May 11, 2021, the traditional festive procession was held in Plovdiv, with which dozens of students and teachers from the Humanitarian High School "St. St. Cyril and Methodius” in Plovdiv celebrate the patron saint's day of their school. "The spirit of this feast which originated before Bulgaria’s Liberation is still alive to this day," said 12th-graders who took part in the procession, which was led by the icon of the Holy Brothers. Our alphabet has preserved us as Bulgarians, we pass this on with love, joy and pride to our children, history teacher Maria Pashkuleva stressed.

And why May 11 is also known as the Day of Bulgaria in the Brazilian city of Sao Paulo and how this date is associated with Bulgarian schools abroad, you will find out from our article Roses of Bulgaria at the Sunday school in Sao Paulo from Radio Bulgaria’s Best collection. The Bulgarian Orthodox church is holding solemn church services to celebrate Holy Spirit Monday today. On this day the Holy Spirit is said to have descended to the apostles and they received the gifts of the Holy Spirit. When they embrace the.. 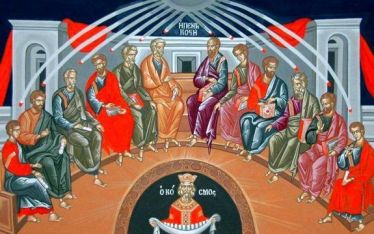 On the 50th day after Easter, we mark the birthday of the Christian Church - Pentecost. This is one of the greatest Christian holidays along with Christ's Nativity and the Resurrection of Jesus Christ . On this day, according to the Holy Scriptures, the..