On January 2, the Orthodox Church pays honor to St. Sylvester – Pope of Rome, who lived in the III - IV century. In 314 he was elected Roman bishop and pope and he remained on this position until his death in 335. This was the time when the most important reforms of Constantine the Great (306-337) were carried out to end the persecution of Christians and strengthen the church.

In the Bulgarian folk calendar, January 2 is known as Silvestrov den and the holiday is observed mainly in the eastern and northern regions of the country. It is also called Karamanovden, Silvestri, and others. In folk traditions the holiday is associated with paying respect to cattle - buffaloes, oxen, etc. In modern times people named Sylvia, Silvana, Sylvester and others celebrate on this day.

On this day the barns are cleaned for the first time after the beginning of the Christmas holidays. On the night before the holiday young men who were carolers are once again divided into groups - this time to visit the homes where cattle are raised. They announce their departure with music and songs that accompany them all the time and they light their way with lanterns. During this night, the farmers and the visitors do not meet or talk. The gates of the barns remain unlocked and the dogs are tied up. In the barn the hosts leave bread, meat, and wine. After cleaning the barn, the young men take the presents and leave. In some regions of the country the host invites them to a festive table the next day.

If a young man was offended or repulsed by a lass he likes, he can take revenge on this day by not cleaning the barn. In such a case the girl's father is in a hurry to clean up before sunrise. In the Western Rhodopes people call the day Spolezov and watch who will be the first to enter the house. The guest must be a good and wealthy person in order to bring a good and blessed year. According to traditions, pork and bacon are not placed on the table to keep the animals healthy. Folk songs about buffalo and oxen are also performed on this day. 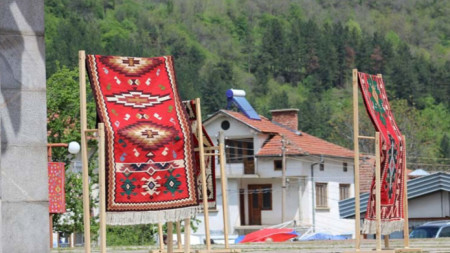