Giving consent for the start of negotiations for the membership of the Republic of North Macedonia in the EU should not be tied to deadlines, but to achieving real results, including on the rights of Macedonian Bulgarians. This was written in the common position with which the political parties represented in Bulgaria’s parliament came out after a 6-hour meeting with of the National Security Advisory Council convened by President Rumen Radev. "We have never denied and do not deny the right of the citizens of the Republic of North Macedonia to identify themselves on the basis of their own self-consciousness and to preserve their languages ​​according to the constitution. Bulgaria insists on the full equality of Macedonian Bulgarians with other peoples in Macedonia. The policy of discrimination against Macedonian Bulgarians, 120,000 people, has recently escalated”, President Rumen Radev recalled. "Comprehensive and resource-intensive actions are needed to restore trust and step up cooperation. Of particular importance are projects providing transport and digital infrastructure with a focus on Corridor 8. This will give impetus to the negotiation process," he said.

Talking to the Bulgarian National Radio, Prof. Alexander Marinov, Chairman of the Strategic Council with the President, commented that the consensus on the topic of North Macedonia among Bulgarian political parties was of key importance before the Bulgarian delegation led by Prime Minister Kiril Petkov visited Skopje. "This is very important, as our neighbours in recent months have been trying to implement a not very positive tactic - by exerting pressure, by lobbying in some Western European capitals and by sponsoring a lot of hostile publications in the foreign press towards Bulgaria, publications that distort the Bulgarian position. It should now be clear that it is not worth relying on creating some kind of split. By the way, some of the statements of the Macedonian influential figures show that they either do not know what is happening in Bulgaria, or try to present things as if there were some significant differences, which of course is not true.”

Skopje-based journalist Vladimir Perev told BNR that Kiril Petkov was going to North Macedonia to discuss issues that had been talked about for a long time and no agreement had been reached so far.

"I think a large part of Macedonians are used to believing that someone else will do our job. We are not taught to do our own job. Someone has to command us. Many of us think that the Americans and the British, or the EU, will put pressure on Bulgaria and it will agree, because it has always been oppressed by the Russians. Moscow used to command the Bulgarians, Bulgaria was an occupied state and it never developed politically on its own."

According to historian Prof. Hristo Matanov, Bulgaria, like Greece, will negotiate long with Skopje on rapprochement. But Sofia is at a disadvantage compared to Greece because, due to the available infrastructure, Athens has maintained good economic relations with the former Yugoslav republic all along. The historian believes that Prime Minister Kiril Petkov is obliged to pay a visit to Skopje to mark the 30th anniversary of the recognition of North Macedonia as an independent state, as Bulgaria was the first country in the world to do so.

"In any case, the framework set by the National Security Advisory Council makes his visit purely a visit of following the protocol. Because I do not believe that the citizens, or the ruling elite of North Macedonia would immediately withdraw from their positions and accept the Bulgarian position."

The visit of the Bulgarian delegation to Skopje is scheduled for January 18th, but it may be postponed. Prime Minister Kiril Petkov has been quarantined after the National Security Advisory Council meeting due to a Covid-19 positive test of Parliament Speaker Nikola Minchev, who is also a member of the council.

In other words, the quarantine between Skopje and Sofia remains in effect for the time being, but the distance is not at all due to the health pandemic. 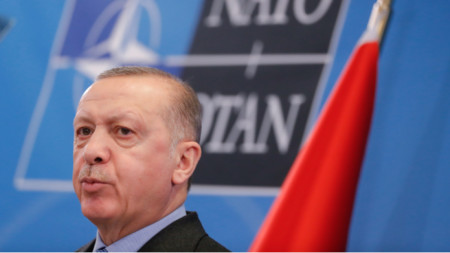 Turkey to bargain over Finland’s and Sweden's NATO membership Turkey will not support the accession of Sweden and Finland to..