The singing skills of the renowned folk singer are an example of how the singing tradition is passed down from generation to generation. Her repertoire is of authentic songs from the region of Radomir where she was born (Western Bulgaria). It includes the rhythmic playful songs of the area, but also slower wedding pieces of the Graovo region.

Snezhana Vitanova was born in the village of Dren near Radomir. Her first singing teacher was her mother and she grew to love the songs of the Shoppe region where she was born and grew up. She actually has a degree in economics, and through the years has successfully been combining her profession with her signing – at concerts, fairs, weddings. She has made more than 70 recordings at the Bulgarian National Radio – of original songs, in an authentic old-time style. Snezhana Vitanova’s two daughters have followed in her footsteps in music – one plays the gudulka and the other is a singer. On the occasion of her jubilee (on 10 January), Snezhana Vitanova talked to Radio Bulgaria about her past as a singer, which began in the village where she was born.

“Dren is the most beautiful village in the area. I was raised with my mother’s songs. I first heard her singing and it was part of the difficult life she led. I later married into a family from Gorna Dikanya in which everyone sang, and from my mother-in-law I learnt many songs, also from the grandmothers and great-grandmothers, I managed to record them. And so life rolled on, until I reached the age of 70. These magnificent ancient songs must not be touched. Once you start they will no longer be natural or vivid, they will lose the emotion that touches listeners. So, together with my husband Kostadin Surbinov, a gudulka (rebec) player with the BNR’s Folk Music Orchestra for many years, we created a style and a repertoire of our own. I have wonderful memories from these 70 years. I will never forget the first time I went on stage. I was 7 or 8 and I sang at the folklore fair in the village of Golo Burdo near Breznik. I was so small I couldn’t reach the microphone – one of the organizers had to hold it for me throughout the song I sang. Once I’d grown a little older and had some experience with recording music and performing at concerts, at a fair in Dren, where there was horo dancing, while the dancers were taking a break I started a slow song – Moma zhito zhuneshe (Young girl harvesting wheat). And while I was singing I saw the women wipe tears from their eyes – I had obviously taken these women back in time, I had touched their hearts. That is what authentic songs are all about, and they must not be “embellished”.”

The popular singer laid emphasis on the huge role some the soloists of the BNR’s Folk Music Orchestra, and the entire orchestra have played in her professional development.

“The first recordings I made at the radio were with the group of a virtuoso gudulka player, Atanas Vulchev. I was so excited and nervous but the recordings turned out fine – songs with style and with nice lyrics. In the years that followed I have had recordings with the BNR’s Folk Music Orchestra, with the group of Rosen Genkov, author of the arrangements and my coleagues Slavka Sekutova, Alexander Stankov and Limitar Lukarski. Working with these high-class musicians has taught me so much. I listen to music constantly to this day, songs are my way of life.” 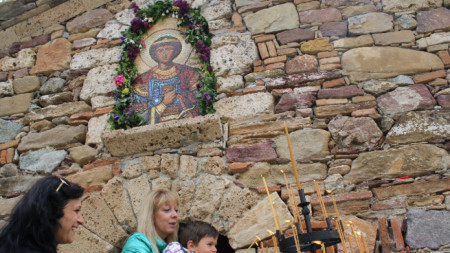