Zhivko Zhelev: My dream has always been to do my creative work here, in Dobrudzha, where my roots are Dobrudzha, the part of the country where he was born, has always been an inspiration for the artistic ideas of renowned musician Zhivko Zhelev, who recently turned 60. Dobrudzha is where he lives and works, despite a serious job offer he was made by the Philip Koutev National Folk Ensemble when he graduated from the National School of Folk Arts in Kotel. During his musical career he has done many things – he has played the kaval, he has arranged music, he has been conductor and author of works from the repertoire of the Dobrudzha-Dobrich Folk Song and Dance Ensemble.  He is also founder of the Bisseri orchestra, for which he has arranged and recorded songs performed by renowned singers like Kalinka Vulcheva, Radostina Kaneva, Todor Kozhukarov, Stoyan Varnaliev and many more.

Zhivko Zhelev is known for his devotion to the folklore of Dobrudzha. With his feet firmly in local tradition, Zhivko Zhelev honed his skills as composer with intriguing experiments as instrumentalist and author, in tandem with his son – pianist Plamen Zhelev. In 2014, he was awarded the grand prix at the radio contest of the BNR’s culture channel Hristo Botev.

“The person who helped me turn to music was my father,” Zhivko Zhelev says in an interview with Radio Bulgaria. “When I was about 11 or 12 my music teacher gave me a piano test, and told my father that I should do music. I was interested in other things – I was good at Bulgarian and Russian, I was even thinking of doing philology, but my father signed me up for music classes in the town of General Toshevo. My first teacher was Boris Bramchiiski, and at the school in Kotel – Stoyan Chobanov and Georgi Penev, they all instilled a love of music in me. Through the years I have enjoyed different things. To begin with, I played the kaval, then I got interested in doing arrangements for the Bisseri orchestra, for Dobrudzha. At this point what I am proud of most is composing music with my son. Our latest works are different stylistically – with piano, kaval, a quartet of female singers. My daughter-in-law, a soloist of the opera houses in Varna and in Sofia, also works with us in our musical quests. People in Bulgaria can always sense when something is good. But a musician always need to know the performances of the people who came before us, people with an enormous legacy. I have many memories of tours with Dobrudzha in Bulgaria and the whole of Europe. Back in the day I was much more interested in giving concerts, but now studio recordings are what is important to me. For more than 15 years I have been recording my own original music, as well as arrangements, and that is my biggest passion. In this process, working with colleagues and hearing the end result is really important. Because that is a way to leave something behind, so the young can get ideas and build on them – that is what it is all about. I hope to have contributed to the preservation of the authentic music of Dobrudzha because I love it very much. Having been born there, it is my dream to always do my creative work here, in Dobrudzha, where my roots are and where I feel strong.” 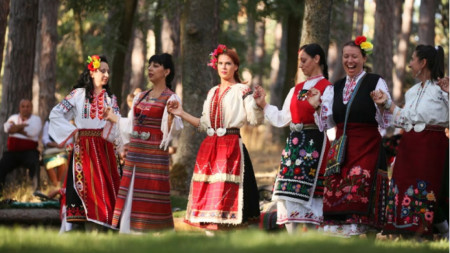