Once upon a time in the Bulgarian tradition, it was not accepted for women to play musical instruments, and even less so when it comes to wind instruments. But over time the taboos fall and nowadays there are not one or two talented Bulgarian women who are magnificent performers of the tambourine, gadulka, bagpipe, kaval, etc. Bulgarian folk music is gaining wide popularity across borders, so it should not surprise us that next to Bulgaria’s excellent instrumentalists there are also foreign ones. ‎Among them is Sian Phillips.

We met her at the National Fair for Folk Art in Koprivshtitsa at the beginning of August - a petite woman with a lively look and a warm smile. Sian is an Englishwoman from Lancaster and one of the thousands of foreign fans of our folklore across borders. "The kaval is an amazing instrument," says Sian, adding:

"It has a very simple design but it is very versatile. It is chromatic, it has four registers, and is very portable. Through it you can learn a very rich tradition of playing that is here and that I think is incredibly beautiful. I think Bulgaria has an amazing rich folk history, and I’m exploring it with a traditional instrument. I also play the accordion but I would like to try the traditional instrument as well. The harmonies are fantastic, but also the melodies themselves are very beautiful and quite complex, not to mention the ornamentation. This is highly masterful music that deserves to be popularized around the world.” The Bulgarian kaval is most often made of plum or cherry wood, and the sound it produces is soft, warm and impactful. For Sian, it is an exotic instrument that is not found in the folklore of her country, but it is widespread in countries such as Bulgaria, Macedonia, Turkey, as well as in some Arab countries. The Englishwoman is part of a multinational Balkan orchestra that rehearses in Amsterdam. She teaches music in a primary school, in the meantime she has won the support of the Arts Council of the United Kingdom (funded by their lottery) and is now researching Balkan music in detail, including Bulgarian music. And what better way to do that than ... play the kaval! ‎

"It is 18 years since I visited Koprivshtitsa, it was in 2005, and there was a flood and everything had to come down into the villages. Very bad weather but it was wonderful fun! And I remembered it so much I had to come back. But this time I bring my partner and it is his first time. He really is enjoying it, he is learning how to play the gaida (bagpipe)," says Sian. And she adds that every visit to Bulgaria enriches her and fills her with positive emotions. Finally, she willingly posed for a photo, together with a group of bagpipe players who came from another part of Bulgaria to demonstrate, like her, their talent and love for Bulgarian folk music.‎ 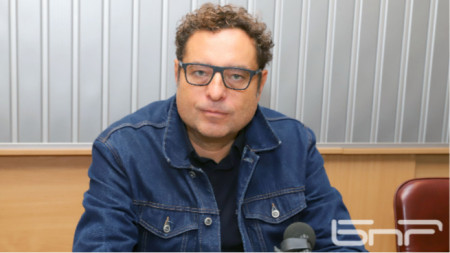 Fairytales are the first way in which a child gets to know the surrounding world, and begins to distinguish good from evil, beautiful from ugly, right from wrong. When we grow up these fairytales are transformed into the personal stories of the people.. Historical knowldege is an immense wealth which can be reached if one has curiosity and a bit of critical thinking. These days we need to be "rich" more than ever and a young woman reminds us of this through the power of art. She is Yona Tukuser - an..