Volodymyr Zelensky: As long as Russia has missiles, it will continue hitting Ukraine’s critical infrastructure "Ukrainians must prepare for a long and hard winter marked by Russian attacks," President Volodymyr Zelensky said in his nightly address. “As long as they have missiles, they will continue hitting Ukraine’s critical infrastructure”, said Zelensky accusing Russia of “using the cold against people”. According to Zelensky, the Ukrainian army is preparing to respond to the attacks in the best way possible. Ukrainians must be prepared to help fellow citizens in distress in the coming months.

Meanwhile, millions of Ukrainians are still without electricity and water after the Russian strikes. In Kyiv, snow fell and temperatures hovered around freezing on Sunday as millions in and around the Ukrainian capital struggled with disruptions to electricity supply and central heating caused by the waves of Russian air strikes. “Russia’s attacks on Ukraine’s energy infrastructure amount to genocide”, Ukraine’s Prosecutor General Andriy Kostin said in an interview for BBC. In his words, 11,000 Ukrainian children were forcibly deported to Russia.

However, it became clear from his statement for the Russian state television that Moscow’s position was not final. “As of now, we stand by President Putin’s position that we will not supply oil and gas to the countries which would set and join the cap. But now we hear talk of different figures, with too many nuances, which we have to take into account”, Dmitry Peskov added. The European Union intends to introduce a price cap on Russian oil as of December 5 aimed at slashing revenues for Moscow’s war in Ukraine. However, Member States have not yet agreed on the level of Russian oil price cap. 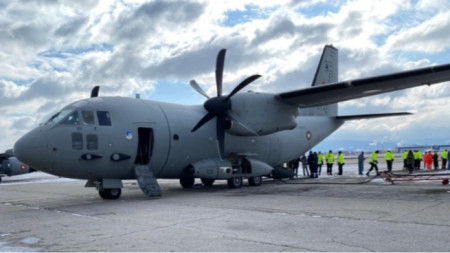 Bulgaria has sent 20 more rescuers from the  Fire Safety and Civil Protection  Directorate  to Turkiye. They were flown by a military Spartan aircraft. 10 medics from the Sofia-based Center for Emergency Medical Care also flew to Turkiye to provide..

47 is the number of new Covid-19 infections registered in the country out of 2,987 tests performed in the past 24 hours, 10 down on the previous day. The positivity rate stands at 1.5%, versus 1.3% the day before, Single Coronavirus Information Portal..