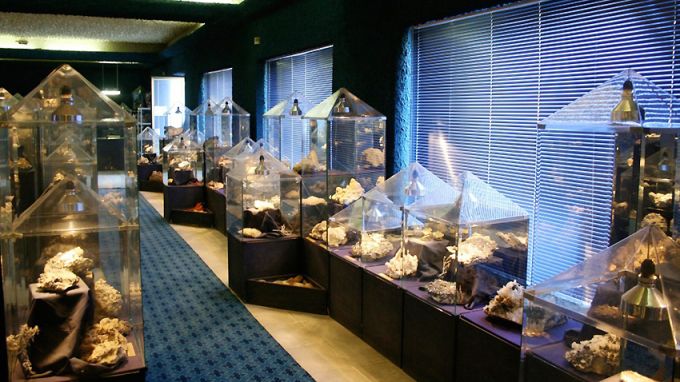 Nature is an unsurpassed architect. For millions of years it has worked to create its unique pieces: the crystals that inspire a feeling of brilliance, refinement and beauty. Shown together in the same place, these properties of colored minerals produce a stronger impact leaving viewers speechless at the magnitude of nature's creations.

The biggest collection of Bulgaria-mined crystals with diverse shapes and structures is in the town of Madan, in the eastern part of the Rhodope Mountains. The collection is featured in a dedicated museum, Rhodope Crystals. It has been collected in the course of 30 years and has about 600 items including ones quite impressive in size. Crystals have been mined by the miners from the local company Goroubso Madan focused on non-ferrous metal ore mining. The company opened shop in 1953 and had a vital contribution into the development of the town. Ore mining in the region dates back to ancient times and Madam has been dubbed an emblem of mining tourism in Bulgaria. Lead was mined there during the Classical Antiquity by Thracians and Romans, and in the Middle Ages by the residents of Byzantium. There is a cave not far from the town where visitors can see a shaft made by the Thracians who were engaged in ore mining in 4-6 c. BC.

“Few lead-zinc deposits in the world can offer as beautiful crystal shapes as the one found in Madan and displayed in the hall", says Sofia Fidanova, curator of the Crystal Hall Museum in the Rhodope town.

„Most of our items are unique. Research in the region began in the early 20 c. when Bulgarian geologist Georgi Bonchev visited the region to collect and record various rock samples and their deposits. The hall opened doors for visitors in 1984 and the collection of crystals is the town's pride and top sight. With it we take the first place in the Balkans. Unlike the Earth & Man Museum in Sofia where the exhibition includes minerals from across the world, in Madan all crystals have been mined in the Bulgarian lands. One can see here impressive cubes of galenite, the key mineral mined in Madan. It is characterized by various admixtures: silver, copper, zinc, iron, gold etc. It has a lead gray color and is the most commonly used ore for the extraction of lead. Interestingly, in our museum the crystals are displayed the way they have been found without being processed. They have only been cleaned of the land mass. This is curious for visitors because these crystals have been mined at depths varying from 200 to 500 m and have not been polished and yet they create a feeling of glamor and beauty. The items are quite expensive though they were not valued enough during communism. Today however a galenite piece sized 20 cm has a price of about 3 thousand euro and is mostly sought by collectors and connoisseurs”, Sofia Fidanova tells us.

For the time being there is no way to take museum visitors to the mining galleries where crystals are in their natural environment. The place is only accessible for Madan miners who though they risk their lives every day, go underground with the hope that they would come across the precious minerals that the earth abounds in. The curator tells us that virtually all miner families in Madan keep small collections of weird unpolished crystal pieces.

„Although galenite is the most poisonous crystal it is very beautiful and crystalizes in amazingly straight shapes. The milk-white calcite is also harmful and can create health problems in miners. Once they inhale particles of it they get rooted into the lungs. Despite that it is very beautiful and has a unique shape. In this museum we have about 70 kinds of calcite pieces. The local deposit is one of the richest in the country, and overall, Bulgaria is rich in this kind of minerals. There are many families who come over to the museum with their children. Getting in touch with the gorgeous crystal pieces one feels respect and admiration for the creations of nature. It is a great experience: words fail me to convey it”, concludes museum curator Sofia Fidanova.