An architectural and cultural monument of national importance, the church of Saint George the Victorious in the town of Kyustendil is located at the foot of the nearby Osogovo Mountain, in Kolusha neighbourhood. The study and restoration of the church have taken decades, yet the mysteries surrounding its history remain to this day. It is the oldest medieval temple in the area, a true treasure trove for historians. If you are travelling in the southwestern part of Bulgaria, it is a must-see on your list. No matter how vividly the place can be described in words, nothing can replace the live contact with its ascetic mysterious beauty created by the hands of unknown masters.

There are no precise reports of when the church was built, no inscription with the names of the church donors has been preserved. But murals dating back to different centuries have been discovered, which constitute rare monuments of church painting. The most valuable are the images dating to the 11th and 12th centuries, extremely rare in Bulgaria and even in the Balkans, we learn from young historian Yavor Mitov, PhD, from the History Museum in the town. He tells us more about the indirect sources from which researchers draw information:

"These are publications by scholars in the field of art history, as well as historians who study ancient documents”, Yavor Mitov explains. “Judging by its architectural features, the church was built in the late 11th and early 12th century. At that time the lands of Kyustendil and Kolusha (then an independent settlement) were under Byzantine rule. It may be suggested that a local governor made a donation and built the temple, but there is no accurate evidence. In the Virgino Chrysobull (a decree issued in the 2nd half of the 13th century by Tsar Konstantin Assen to the Monastery of St. George the Fast near Skopje) a mention is made for the first time of a cloister of St. Nicholas in Kolusha next to Velbuzhd (the medieval name of Kyustendil). Prof. Lilyana Mavrodinova, one of Bulgaria’s great scholars in this field, believes that the temple at that time was dedicated to St. Nicholas, and later that was changed. The iconographers who painted the most valuable layer were really exceptional. They are believed to have arrived from Thessaloniki or from Ohrid. They were found to have used very expensive paints containing impurities of gold. Obviously the donors were quite wealthy people. As far as the architecture is concerned, it is supposed to be the work of Constantinople masters. It is remarkable that such an exquisite church was built in such a remote place."

Later murals are also valuable because they reveal separate epochs in church painting. There are even images dating back to the 11th century, but they are fragmentary and do not provide material for scientific conclusions. A well preserved image is that of St. John the Forerunner, dating from the 15th century. The next layer (from the 16th century) has preserved beautiful images of St. John the Baptist and St. Sava of Serbia. The last complete painting of the entire church was made after the Liberation of Bulgaria from the Ottoman yoke, between 1878 and 1882.

The building itself is relatively small in size - 10 metres long, 8.70 metres wide. The church is a cross-dome structure of the cross-in-square type, as only several other extremely valuable historical monuments in Bulgaria.

"The temple can only be compared to a few churches in Bulgaria that are of this period and have the same architecture," explains Yavor Mitov. “These are the churches in the Zemen Monastery, in the village of Patalenitsa, the recently restored church in the town of Rila (with unique murals from the late 12th century).

The value of the oldest frescoes in the Saint George Church in Kyustendil is often compared to that of those in the Boyana Church in Sofia dating to the same period. But there is a difference in construction. The church in Kolusha is of brick masonry, which is more expensive as a technique than the stone one. It is all evidence of really influential donors who were, in all likelihood, part of the regal family or of the local provincial Byzantine aristocracy. "

One hypothesis is that the tomb of the Bulgarian Tsar Mihail III Shishman (1323–1330), who was killed at the Battle of Velbuzhd on July 28, 1330, is located in the church. And in the church yard one can see another building called “The Renaissance School”. Over the years, it has taken on various functions. It is now a museum to the church. "The exposition at the Renaissance School impresses with its mural paintings from the various historical layers removed from the church. The upstairs hall is for exhibitions related mainly to church history and culture. Interest in this cultural monument is very high, especially in recent years. It is noteworthy that there are many visitors from Europe – historians as well as tourists coming to Kyustendil”. 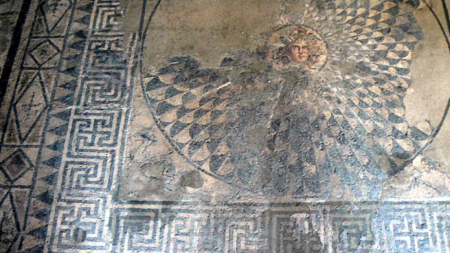