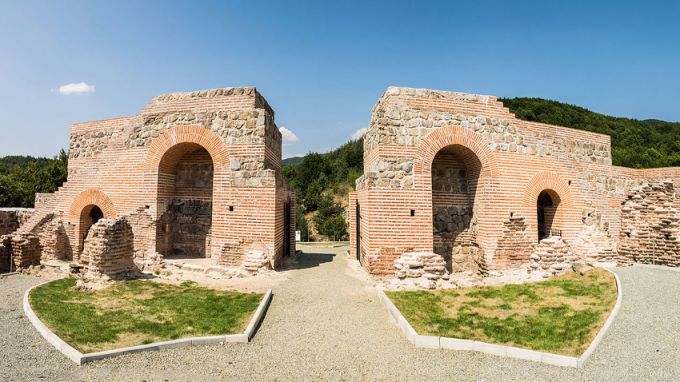 “On 17 August 986 the warriors of Samuel smashed up on this spot the Byzantine invaders of Emperor Basil II. Glory forever!” These are the words

engraved on a stone plate, placed at the Trayanovi Vrata (Gate of Trajan) fortress, situated some 60 km to the south of Sofia, near the Trakia (meaning Thrace) Highway. The place is visited by thousands of Bulgarians each year due to its relation to one of the most glorious victories in this country’s history.

A faithful war was led between the Byzantine Empire and Bulgaria in the end of the 10th c. Emperor Basil II was determined to destroy the kingdom of his neighbors. The Romans took off to the important city of Sredets or what’s today Sofia with an army of 30,000. The warriors of Tsar Samuel totally smashed the invaders at the foot of the walls of the ancient fortress by eliminating nearly the entire cavalry of Basil II, along with most of his land forces.

The Gate of Trajan name was first used in the 15th c. It is the most remarkable part of a large fortification complex which guarded for centuries the access to Constantinople and the straits. The date of the original building works remains unknown. It was named after Roman Emperor Trajan who was known for his remarkable construction activities. The fortress has been restored as of the autumn of last year. It is opened for visitors and is even included in the list of the 100 National Tourist Sites of Bulgaria. More than 10,000 tourists have visited it in the course of 5 months only, local tour guide Emanuil Gavryiski calculates: “Tourists might see the restored fortress which is very interesting in terms of culture. It used to be a military garrison for some 100 warriors and is actually a very beautiful, representative building. You can spot the series of arcades, surrounding the entire inner yard and people really admire the view. One can learn the details of the past here. The fortress itself is in the form of a somewhat irregular rectangle, built up directly on the rock. The main entrance is on the northern side, framed by two gabled guarding towers. The Gates of Trajan has a large inner courtyard, surrounded by an arcade. Besides the main entrance there are 5 other smaller doors, situated at each of the towers. Just like many other fortresses, this one has a secret underground tunnel, linking it with the local riverbed. The stone staircase served as a tool for leaving the fortress in case of emergency and also for water deliveries. The tunnel is well-preserved and can be seen today as well, but it is closed for tourists for safety reasons.”

Scientists presume that many walls and guarding facilities have been built up at this spot due to its strategic importance. Here is what else archaeologist Emanuil Gavryiski says:

“The most important route across the Balkan Peninsula goes through the passage itself and it was named the Diagonal one – it links Belgrade with Constantinople. The place was of strategic importance in ancient times. The Gate was situated some 600 meters to the northwest of the fortress – a military facility with a big wall and other two fortresses at the flanks. The huge arc of the Gate, some 18 m in height was preserved till the 19th c. The place was well-guarded and really important over a long period of European history, from the Early to the Late Medieval Period.”