May 24 – day of Slavic First Educators and Enlighteners We find detailed information about the Holy Brothers in the long passionals written at the end of the 9th century. Their origin is not mentioned in the early historical sources. We only learn from these sources that they were sons of supreme Byzantine dignitary. Later, however, it became clear that Cyril and Methodius were of Bulgarian descent, Associate Professor Dimo Cheshmedzhiev who lectures at the Paisii Hilendarski University in Plovdiv and is a member of the Cyril and Methodius Scientific Center with the Bulgarian Academy of Sciences told Radio Bulgaria. Part of the evidence that the mother of Cyril and Methodius was a Slav is based on the sources that indicate that Methodius was appointed governor of the Slavic district in the Byzantine Empire. Constantine-Cyril participated in various Byzantine political and religious missions as a theologian. What made the Holy Brothers Cyril and Methodius create the alphabet, known today as the Cyrillic script? According to the Life of Constantine-Cyril the Philosopher, they wanted to see some of the liturgical books translated into Slavic language, Associate Professor Cheshmedzhiev says. In 862 the Prince of Great Moravia Rostislav entered into a political union with Byzantium. Upon his initiative brothers Cyril and Methodius translated the most important Christian liturgical books into Slavonic. According to the passionals of brothers Cyril in Methodius, in 855 they retired to the monastery Polychron in Asia Minor and Methodius served as an abbot of this monastery. This happened between the Saracen and the Khazar Missions of Constantine-Cyril.

Apparently, the Byzantine Emperor Michael III (842-867) was well-aware that brothers Cyril and Methodius fulfilled their missions quite successfully. That is why he asked Constantine-Cyril to translate the liturgical books and create a new alphabet.

The missions of the Holy Brothers Cyril and Methodius were mainly political, Associate Professor Cheshmedzhiev says. Their first mission was in the Arab Caliphate. Constantine-Cyril the Philosopher went on that mission without his brother as part of the Byzantine delegation which disputed with Islamic theologians topics related to the Holy Trinity. The second mission of Constantine-Cyril the Philosopher as theologian was the mission to the Khazars. He went on that mission together with his brother Methodius. The mission to the Khazars was political, our interviewee says. The third mission (the Moravian Mission) was an educational mission with political elements, because it was a result of the union between Great Moravia and Byzantium.

Bulgaria started to honor Cyril and Methodius when their disciples Kliment, Naum and Angelarii arrived in this country and founded literary schools-one of them in Northeast Bulgaria with a center in Preslav and the other one in Bulgaria’s southwest. Clement of Ohrid (Kliment Ohridski) held the first praiseworthy speech dedicated to Cyril and Methodius. The service was written by Constantine of Preslav (Konstantin Preslavski)-Bulgarian man of letters and scholar who lived at the end of the 9th and the beginning of the 10th century. Cyril and Methodius were proclaimed Equal-to- the Apostles, because they created a new alphabet and new liturgy for pagan nations. They introduced a new model of Christianity and as a result were called First Educators. They also believed that divine services must be held in understandable language, which was not accepted by the Western Church until the end of the 17th century. Thus, Christianity was popularized easier and quicker on the Slavic territories.

After Cyril’s death in Rome in 869, an icon with a burning candle was placed on his tomb, Associate Professor Cheshmedzhiev says. The earliest images of Cyril and Methodius date back to the 11th century and are painted at the Saint Sophia Cathedral Church in Ohrid. The church in the village of Kurbinovo (North Macedonia) keeps images of Cyril and Methodius of the 12th century. The well-preserved inscriptions read that Cyril and Methodius were teachers of Bulgarians. No inscriptions were preserved in Saint Sophia Cathedral Church in Ohrid, but Associate Professor Cheshmedzhiev assumes that they were written in the same spirit, because the cult of the two brothers is linked with the development of the Bulgarian Archbishopric of Ohrid. It was established in 1018 and existed as Bulgarian Church until 1767. 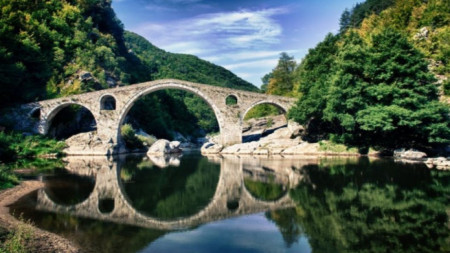 Their stone feet firmly on the ground, the stone bridges of the Rhodopes, rising above the bodies of water in the mountain, have seen history unfold and have their own stories to tell. Though they are frequently called.. 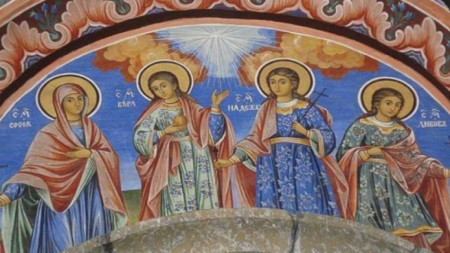 Their stone feet firmly on the ground, the stone bridges of the Rhodopes, rising above the bodies of water in the mountain, have seen..

A century ago, on September 22, 1921, the patriarch of Bulgarian literature Ivan Vazov closed his eyes for the last time, bequeathing to the..