Photography ethics should not be violated for the sake of a good shot, says award-winning photographer Minko Mihailov A photo exhibition was officially opened there on the first day of September in Crystal garden in central Sofia. The exhibition is called "Directions" and until September 14 presents the best shots from a photography competition of the State Cultural Institute to the Minister of Foreign Affairs at the beginning of the year. The occasion is 15 years since the establishment of the Institute, with the mission to affirm the positive image of Bulgaria as a modern country with a rich ancient and modern culture, through the means of cultural diplomacy.

The aim of the competition held between February and May this year was to select and display unique images taken by photography enthusiasts, without limitations based on age or professional experience, which directly or indirectly reflect the themes of globalization, identity, intercultural dialogue and tolerance between different nations.

The big winner among the documentarians is Minko Mihailov and his "Walk at Sunset" shot in 2019. The Plovdiv-born photographer has been engaged in amateur photography for more than 20 years and is already well known to lovers of photographic art in Bulgaria. His work recently aroused great interest on social networks, as it presents a beautiful moment of a thunderstorm in Dubai, and the shot captures the moment when lightning strikes the world's tallest building Burj Khalifa /Dubai/.

With his "Walk at Sunset" awarded by the jury in the "Directions" competition, Minko Mihailov presents a silhouette photograph, which shows the U Bein Bridge in Myanmar (Burma), which crosses Taungthaman Lake. To this day, the 1,200-metre-long facility is the main link for locals on both sides of the lake. "I just tried to capture a moment of passing or rushing people. Everyone is in a hurry or absorbed in their thoughts, going somewhere – everyone following their own direction. The photo is of silhouettes. I use this technique very often. I let the human imagination run wild. We don't know exactly where these people are going, they may be brother and sister, they may be mother and son, or they may be friends. So one can finish the story on one's own. And the bridge, which can be seen in the frame - teak wood columns, is part of the longest wooden bridge in the world. This wood is used because it is resistant to weathering. They even built the royal palace in this city from it. The impressive thing is that when you are there, you immediately get inspiration for photos, especially since we were there at sunset and usually there is a special color, magic, mood in the sunset shots”.

According to the talented photographer, the passion for photography is fueled in South Asia also because of the local people, because, contrary to European customs, Asians are happy to stand in front of the lens of strangers. This is very important, says Minko Mihailov, because if someone does not want to, he or she should not be photographed in any case. "It leaves a bad feeling. When shooting in the wild, there are also rules - the subject is always more important than the photo you take. If a person is going to disturb an animal or step on a protected plant, it is better not to take any picture there. This is the photographic ethics, it must not be violated. " 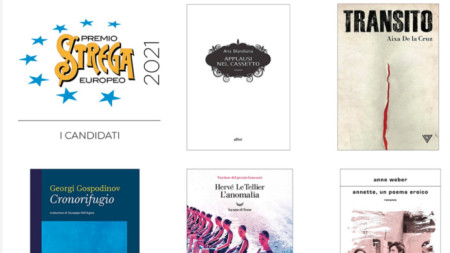 Bulgarian writer Georgi Gospodinov is among the nominees for the most prestigious literary award in Italy "Premio Strega Europeo". His novel "Time Shelter" is among the five finalists in the category of translated books. Gospodinov..