I love the audience and my fellow musicians, I dream of returning to the concert halls! Having started his career at the age of 10 as a child prodigy, Vasko Vassilev is now one of the most charismatic performers on stage, his concerts invariably bringing in large audiences.

On his 50th birthday, 14 October, the renowned violinist chose to celebrate in his home town – Sofia – with a concert, a book presentation, and a presentation of a film about him. The book is called “Vasko Vassilev backstage” and brings together 300 photographs by Hristo Rusev taken during different concert tours by the world-famous violinist. The film is part of the series “The children of the Other Bulgaria” by journalist Georgi Toshev, and it traces the life of the talented musician who began his studies in Moscow at the age of 9, and went on to study in London.  In 1988 he won the Jacques Thibaud Competition in Paris, then Carl Flesch in London and the Paganini competition in Italy.

Between the age of 19 and 21 he was guest concertmaster of the London Symphony Orchestra and the London Philharmonic. At the age of 21 he won the title “super-soloist” of the Opera of Lyon, France. At the age of 23 he became the youngest concertmaster of the Royal Opera in London, were he is currently creative producer. Audiences also know him from Laureate which he founded, as well as for his work with names such as Plácido Domingo, Valery Georgiev, Luciano Pavarotti. Sting, Zucchero, Lili Ivanova. Vanessa-Mae. He has released 10 albums.

Even though he has been accustomed to the stage since childhood, Vasko is looking forward to the event in Sofia with eager anticipation:

“For me every concert is special but this one is different because people from all over the world worked hard to make it happen at this particular time which is so hard for audience and artists alike. For me it is a wonderful experience. I have selected a very nice repertoire, a rich blend of styles and works, benchmarks in my 40-year career - from film music to flamenco, Piazzolla and of course – classical works.  As to Hristo Rusev’s book – it is his idea entirely. To begin with it was a bit strange to have someone with me taking pictures all the time, but I got used to it. He took 50,000 photographs in all, and made a selection from them for the photo album. I think it is the best present anyone can have. I really love the way the book is made. And I am surprised at myself – there is not a single picture in which I am frowning or in a bad mood.” During lockdown, Vasko Vassilev used social media to communicate with his audience and was constantly posting videos conveying serious messages, but always with a sense of humour and a smile.  One of these videos helped raise 10,000 Leva for the nurses at Pirogov emergency hospital in Sofia.

What are Vasko’s dreams today, at age 50?

“I think that any artist would say the same thing as me – I want to see people return to the concert halls, where they can be safe, I want us to go back to normalcy. Our business has been affected by the pandemic more than most – more than restaurants and hotels even. I miss the contact with the audience, especially in Britain where the restrictions are strictest, I miss the contact with my fellow musicians, with the singers, with the performing artists.”

Every person has an anchor, and the family is one. For Vasko is has a special role. His parents, who supported him from the earliest age, are musicians, as are his three sisters.

“My family is big and colourful, I just became an uncle for the second time, I am very happy with my sisters. My baby sister is a marvelous percussionist and she has a wonderful career. Without my parents, without my family I would never have achieved what I have. I would like to turn to all music lovers – I love you very much, if you can’t come to Bulgaria on 14 October, then do come to my next concert!” Yana Borissova's works have been enjoying huge popularity in Belgium, France, Serbia, Russia, Argentina, the USA, Italy and Germany. In 2008 the French Ministry of Culture, together with Editions Théâtrales, Тheatre Odeon and Avignon Theatre.. 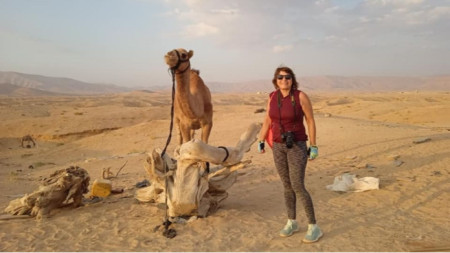 Years ago, during excavations near the Eneolithic temple complex Dolnoslav at the foot of the Rhodope Mountain, Tsvetana Videva came across ceramic vessels dating to six millennia ago. The artefacts were not only beautiful, but radiated energy..