Bulgaria is among the countries in the European Union with the largest share of women in senior management positions, according to Eurostat. In general, the proportion of women at the managerial level is still lower than that of men.

In the period of the pandemic which has been continuing for more than a year, the largest share of women in management positions in the EU has been registered in Latvia (45%) and Poland (44%). They are followed by Bulgaria, Hungary, Slovenia and Sweden with 42 % each. At the opposite end are Croatia with 24%, the Netherlands with 26% and Cyprus with 27%, BNR reported..
In the third quarter of 2020, more than 9.5 million people were in leadership positions in the EU. Of these, 6.2 million were men and 3.3 million were women. Although women make up almost half of the EU's employed workers (46%), women in leadership positions amount to 34%.
Radio Bulgaria News    Eurostat leadership management manager men senior positions women

We are considering options to facilitate entry of tourists, announced Bulgaria’s outgoing Deputy Premier and Minister of Tourism Mariana Nikolova in Varna, the press center of the Bulgarian Ministry of Tourism reported. A vaccination certificate, a..

Bulgaria’s Constitutional Court has annulled the amendment to the Obligations and Contracts Act (article 112), by which this country’s previous National Assembly enforced a ten-year limitation period for obligations of natural persons. 10.. 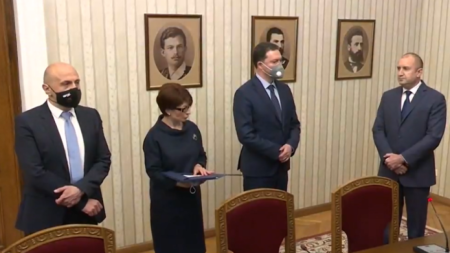 Bulgaria’s President Rumen Radev handed over an exploratory government-forming mandate to the biggest Parliamentary group-GERB-SDS. Prime Minister designate Daniel Mitov has 7 days to form a cabinet that would receive support in..

418 new cases of Covid-19 have been confirmed in Bulgaria in the past 24 hours out of 4,644 tests performed, indicate data of the Single Coronavirus..