No queues formed in front of polling stations in London General elections and football are certainly the most discussed topics among Bulgarians living in the United Kingdom today. Bulgarians in London are voting at snap Parliamentary elections again in a moment when thousands of tourists are arriving at the British capital to enjoy the atmosphere of the forthcoming Euro 2021 Final on Wembley stadium. However, Bulgarians are not expected to wait in front of the polling stations that long, unlike the general elections held on April 4 this year. This is so, because a total of 135 polling stations opened in the United Kingdom, which is 100 more as compared to the April 4 Parliamentary elections.

No problems have been reported in smaller towns, where Bulgaria opened polling stations for the first time, representatives of election commissions near London told Radio Bulgaria. People are showing bigger interest in today’s snap Parliamentary elections, because machine voting is easy. The polling stations opened at 7.00 am and more than 30 voters cast their ballots in each polling station until 10.00 am. “Today, people are in good mood and vote with a smile on their face. They are satisfied with the fact that more polling stations opened in the UK”, said Svetlana Kaneva, head of the Luton-2 polling station.

“Both Luton-1 and Luton-2 polling stations are ready for election day. We managed to persuade the authorities to open 4 polling stations outside London. On Monday (July12) a car of the Bulgarian embassy in London will visit all polling stations and an embassy official will sign and collect the election papers. Bulgarians in London have signed a petition calling for some amendments to the electoral law and we have already prepared a proposal to the new government in Bulgaria. Bulgarians abroad demand electronic voting and postal voting. This would help us avoid the problems we have had over the past two months and the problems concerning the appointments at the sectional election commissions. We are not happy with the fact that three days before the early general elections the political parties started to appoint their representatives and neglected us, who have been trying to organize people and election commissions for three whole months.”

"People in London are casting their ballots quickly thanks to machine voting. No queues formed in front of the polling stations unlike the previous general elections", announced Stanislav Mitov from Walthamstow, East London.

“The high voter turnout which was registered at the April 4 general elections, continues. All people are voting for a change, for a better future of their motherland. We live abroad, but all people have responsibility for their country. Our families, children and relatives live there. We all want a better government and a better legislation”, said Antonina Belcheva, Secretary at the Luton-1 polling station located not far from London.

“People can choose where to vote, which is great. Those who did not have the opportunity to travel long distances can now vote in polling stations located near them. This time the number of polling stations in the UK is bigger. That is why we are not expecting long queues, as it happened last time on April 4. Voting with a machine is quick and easy and we are not expecting any queues in front of the polling stations. We hope that the polling stations will close at 8 pm tonight. However, they will be kept open until 9.00 pm if necessary. We are not expecting any problems on election day. No problems are expected during the delivery of the election papers either. Last time we had to take our election papers back to Luton and our embassy in London took them on the next day. We hope that this would not happen again and that everyone have learned their lesson since then.”

No overcrowding has been reported until now, said Galina Georgieva, Deputy Chairperson of the sectional election commission at Hemel Hempstead. Bulgaria did not open a polling station in Hemel Hempstead in April. Almost 300 Bulgarians living in the vicinity of London are expected to vote at this polling station today:

“The polling station opened on time and voting has been going smooth. All people come with smiles on their face. 150 Bulgarians voted until noon. In my view, people are more interested in elections than in football. Well, the football topic is likely to prevail tonight when the football final begins. Bulgarians in London strongly hope that their home country would change. ”

A total of 1,037 people cast their ballots at Luton-1 and Luton-2 polling stations at the April 4 Parliamentary elections. A record-high voter turnout is expected today in the UK and in particular in London and the area near England’s capital. 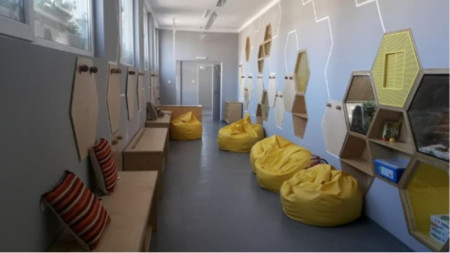