Cloudy with occasional rain and snow During the night there will be considerable clouds over the Western half of the country, and clear skies over the Eastern half. Minimum temperatures zero - 5° C., reaching 8° C. in places in Eastern Bulgaria where there will be a moderate wind from the South.

In the afternoon the wind in the Northwestern half of the country will turn from the Northwest and temperatures will drop sharply, the rain will turn to snow. Ice will form in many mountain regions and in the Western portion of the Danubian plain.

Over the mountains the clouds will increase and in the afternoon there will be snow, in the lower parts – rain and snow. On the ridgetops there will be a strong to a temporarily tempestuous wind from the Southwest, temperatures will be high. Maximum temperature at an altitude of 1,200 m. around 7° C., at 2,000 m. around zero. By the evening the wind will subside and will turn from the West-Northwest, ushering in colder air. Temperatures will drop rapidly. 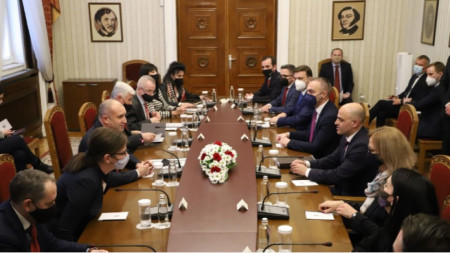