No Bulgarian will fail to recognize the unique palette and imagery of Vladimir Dimitrov-Maistora (The Master), one of the greatest Bulgarian artists.Like any other genius master, he has left hidden symbols and coded messages in his works for future generations who now admire and are inspired by the artist's gift.

Indeed, the Master's paintings carry the spirit of Bulgaria - of its beautiful villages and striking landscapes, but the underlying ideas are universal and timeless. His works explore the themes of war, nature, and the purity of the human spirit - all of which stirred the artist's mind. At the center of the Master's universe is the humble, impoverished hard-working individual, firmly planted on Bulgarian soil. "Bulgarian peasants are patriarchal fathers and saintly mothers", the artist had said in his lifetime. This was how he saw them and how he painted them on his canvases.

As a confirmation of this is the story of one of the Master's emblematic works. The painting "Young Woman from the village of Shishkovtsi", as the author titled it, left Bulgaria in the 1930s to participate in the Venice Biennale. It came back with a gold medal and the title "The Bulgarian Madonna". Since then the painting that greets visitors to the Vladimir Dimitrov-The Master Gallery in the town of Kyustendil remains famous by this name.

"We have a responsibility to his vast body of work and its worldwide recognition. It turns out that we - the Bulgarians, know much more about Leonardo da Vinci's paintings and their hidden messages, and we do not even suspect what this Bulgarian genius, the Master, has left us. He is not only ours, he is a world-class artist" - says the artist from Kyustendil Evgeni Serafimov, who always stops with his students in front of the painting "The Bulgarian Madonna", with the image of a girl among red apples and blooming flowers. "This is the most recognizable Bulgarian face among the paintings and when you say Bulgarian woman, this is the face that stands out in our minds," says Evgeni Serafimov and draws our attention to the coded messages in the painting:

"On this oil on canvas the Master has portrayed Dafina Koteva, only 14 years old, from the village of Shishkovtsi. Her extremely delicate, pale face, is against the background of a bright, intense nature. The girl is depicted only in ochre and gray. These are also the colours of her dress - her folk costume, of her face and hands. There are no coloured braiding ornaments typical of the garments worn in the Kyustendil region, but we see a strange contrast between the maiden, whom the artist paints as a transparent ghost, against a completely bright background of ripe apples and red flowers. This drastic contrast baffles the viewer.

But the explanation lies in Dafina's tragic fate. At the time her portrait was painted, the girl was ill with tuberculosis, a terrible disease that plagued the Bulgarian rural countryside in the early 20th century. Due to malnutrition and lack of medical care, the disease caused hundreds of people to pass from this world.

Dafina died shortly after the Master painted her. It is important to note that she came from a very humble background. The bereaved parents did not even have a photograph of the girl. Recently a previously unknown smaller portrait of Dafina that the Master had made as a gift for the family, has arrived at the gallery. It also tells the story of the "Bulgarian Madonna." And if you get very close and look at the pupils in the famous work by the Master, you will see that there are apples, wine-red in colour and with small dark petals. Or perhaps her eyes are reflecting a more ideal world where the Tree of Knowledge stands.

These are the questions the genius - the creator – poses to us. Unfortunately, we Bulgarians do not give due credit to the things we have as our ancestral heritage. And there - in nature, in traditions, in the heritage of our great thinkers - lie the truly important things we have. But first we have to interpret them so that we can pass them on to the world." Today it is important to look more often at the Master's paintings, in the centre of which stands the Man. Not the man of power and wealth, but the small, impoverished, honest man, an almost extinct species of the last century. The master had tried with all his artistry to capture the spirit of this humble, yet noble Bulgarian through his paintings. 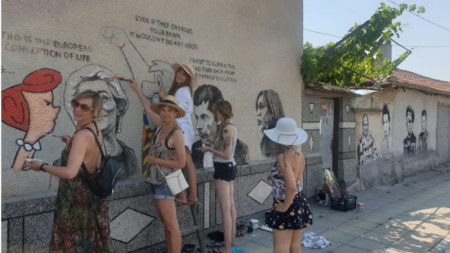