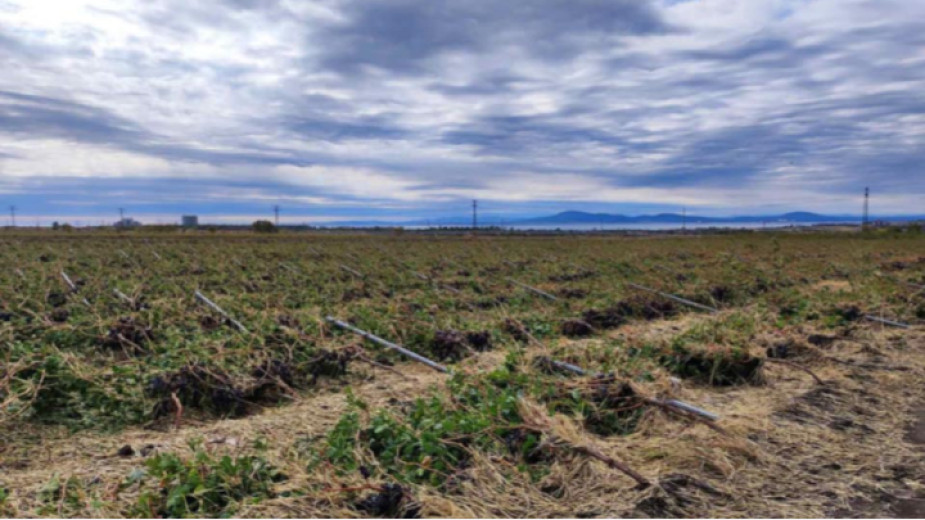 About 80% ,or nearly 2,500 decares of vineyards in Bulgaria’s Pomorie municipality have been affected or completely destroyed by the big storm and subsequent hail in the Burgas region at the end of last week. And although there is also damage to the infrastructure of the municipalities, the damage to the agricultural crops was the most serious. Production of more than 1 million tons of grapes was destroyed, according to data from the Ministry of Agriculture from the last few days. The situation is really serious, one of the affected winegrowers, Mladen Varbanov, told the BNR correspondent in Burgas, Daniela Kostadinova:

"Unfortunately, the red massifs are completely affected. Some later white varieties, as well. The losses are high. The bad thing is that the hurricane wind, which in some places reached 150 km per hour, knocked down even the wire structures and it is necessary to increase the costs for their recovery. Now we hope for help from the state, because the producers do not have insurance on a large scale, due to some irregularities in the insurance policy in Bulgaria. Namely, payment of compensation in case of 100% completely destroyed crop."‎

Talking to the BNR, Yordan Chorbadzhiyski, chairman of the National Viticulture and Wine Chamber, welcomed the quick reaction he has seen for the first time from the state in describing the damage and initiating the procedures for compensation to the producers.‎

"At the moment, we need about BGN 2,000 per hectare - to restore the structures, wires and drip irrigation. The amount is large, and there are already farmers who have declared that they will refuse to grow vineyards any more."‎

And again, the question of the lack of concluded insurances on the part of the affected farmers was raised. ‎

"The conditions of the insurers do not correspond to what the winegrowers expect - they do not pay compensation in case of hail and frost, that is why people do not make insurance”, comments Yordan Chorbadzhiyski. “If an insurance clause for hail, for example, is included, the price of the insurance policy itself becomes three times more expensive, due to the frequency of the phenomenon. I would describe the current disaster as a "force majeure that happens once every 50 years. I have been farming for 20 years and I have never seen anything like this." ‎

Chorbadzhiyski is adamant that the subject of compulsory insurance must be included in the government's agenda. The caretaker Deputy Minister of Agriculture, Todor Dzhikov, is of a similar opinion, as he assured that a similar measure is being considered for the new strategic period in the industry, but emphasized that even now the state supports and encourages insurance.‎ "Even now there are two products for the benefit of farmers. One is under the "Harvest Insurance" measure, which is part of the National Program for Support in the Viticulture Sector. Such developed assistance also exists for other agricultural products in Bulgaria. There, the state takes over 60% of the insurance premiums. I can define the interest for last year as zero. Less than 10% of agricultural producers have benefited from this aid".‎

And here comes the big question - is there an insurance culture in Bulgaria or is the reason for such behaviour of farmers the lack of correct and timely payment of benefits by insurers? According to Todor Dzhikov, the state should leave its role as the main financial guarantor for citizens, and insurance companies should clarify their conditions and obligations and increase the quality of the service they offer. "The branch is open for meetings and discussions with the competent authorities," says Veselin Angelov, a member of the Board of the Association of Bulgarian Insurers: "The opinion of the insurance sector in Bulgaria in quite harsh. ‎I think it has undergone quite a metamorphosis in recent years. One can no longer talk about the lack of culture in the market. ‎The products are available. Here we still take action when they are mandatory without thinking that the dangers are all around us. Insurance should be a voluntary act, but when people have no view of the risks and the consequences affect many people, maybe agricultural insurance is a good temporary measure to be mandatory. That's how we'll see the benefits."

And somewhere between the vagaries of nature, accusations and excuses, one of the richest vineyards in Bulgaria lost its exceptional harvest for 2022. "The best for the last 20 years that we have had," admitted the Deputy Minister of Agriculture Todor Dzhikov.‎