The world-famous French cartoonist Plantu has arrived in Bulgaria to open his exhibition in Sofia in the company of his Bulgarian colleagues Christo Komarnitski and Theodore Ushev. The panel with his drawings, a provocative reflection on politics, ecology and society in general, attract the eyes of passers-by at Slaveykov Square in the heart of the Bulgarian capital. "It's extremely brave of you to put them out on the street," notes Plantu.

With his pen and tablet, the cartoonist showed how the drawings were created – with a nice, bold gesture, the dove of peace appears, carrying a pencil in its beak (or a question mark, or takes the shape of the map of Ukraine), or the mouse appears, with which the artist so often puts his signature. The colours, on the other hand, are imbued with symbolism - in this case, they combine the French and Bulgarian national flags. The drawings, in his words, are a kind of phrases, a graphic syntax or a translation: "We read the newspaper and the articles turn into drawings. Instead of translating with words, I translate with images,” he explains. Plantu says that cartooning is a space of freedom. Is it absolute freedom? According to the Bulgarian cartoonist Christo Komarnitski, the thought of how the audience will accept the cartoon is "the little brother or sister of self-censorship and it sometimes prevails over the author".

"The best examples of a caricature are when it annoys more people”, notes another world-famous artist, Bulgaria’s cartoonist Theodore Ushev. “The caricature was born alongside democracy. Aristotle described the first cartoonistas the man who drew uglier than the ugliest thing in the world. Democracy and caricature go hand in hand – if one disappears, so will the other.”

"Caricatures in Bulgaria have a very special place“, adds political scientist Dimitar Ganev. „They had a very important place even before the democratic changes, during the totalitarian regime. One of the big scandals in the early 1970s was the collection of folk epigrams "Hot Peppers" by Radoi Ralin and Boris Dimovski. This is perhaps the first moment when the spirits begin to riot.'

For Plantu, the cartoonist is a barometer for freedom of speech, but with social networks the context changes significantly:

"Sometimes the drawings are not understood. You paint it here in Sofia, but it can remain misunderstood ten thousand kilometers or 50 meters away. This is exactly what happened to my Charlie Hebdo friends. It's news for cartoonists that we're being criticized now for cartoons we've never drawn."

None other than Cardinal Richelieu himself is the inventor of social networks, notes the French cartoonist, because he said: "Give me ten lines written by the hand of the most honorable man, and I will find a reason topunish him by hanging."

Therefore, the pedagogical work is extremely important, and Plantu, who works with children, will visit several Sofia schools, because we must be prepared, and as convenient a tool as the Internet may be, it can turn into a demon. In his work, the cartoonist deals with stereotypes. To pay tribute to the French cliché - the baguette, which has recently entered the UNESCO list of Intangible Cultural Heritage, Plantu painted the symbol of the organization, but replaced the columns with small baguettes.

What is the relationship between demons and democracy?

"Against the demon Putin - I drew him as a dragon - is our little Europe, which is sometimes demonic. It gets much criticized, but it has chosen which side to stand on. And maybe our democracies are demonocracies," Plantu explains. Plantu's personal demon is the fear of the white page, but he cites the experience of the Belgian cartoonist Philippe Geluck, who draws only on blue paper and is no longer afraid of the white pages. 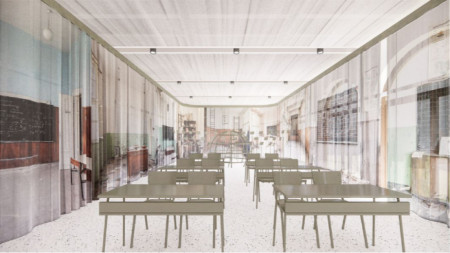 Bulgaria will have its own pavilion during the Venice Biennale of Architecture. After a competition, a special jury selected the project "Education is the movement from darkness to light" to represent this country at the prestigious..

Politics Without Principle, wealth without work, pleasure without conscience, knowledge without character, commerce without morality, science without humanity, religion without sacrifice - these are Seven Deadly Sins of our modern society according to..

Politics Without Principle, wealth without work, pleasure without conscience, knowledge without character, commerce without morality, science without..

Bulgaria will have its own pavilion during the Venice Biennale of Architecture. After a competition, a special jury selected the..