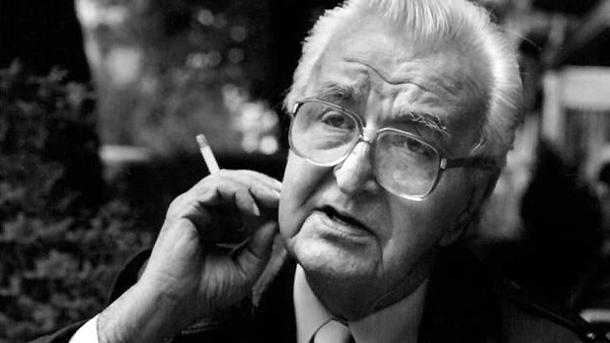 Early 2015 will mark the 100th birth anniversary of Bulgarian diplomat, erudite, polyglot, screenplay writer and film director, art critic, pedagogue, writer, translator and broadcaster Prof. Petar Ouvaliev. During the Cold War era he emigrated to the West. With his essays aired by the BBC he became iconic. It is little known however that his radio career actually kicked off on the wavelengths of Radio Sofia, the international service of the BNR, succeeded by Radio Bulgaria today. In 1937 daily broadcasts began in French, German, English and Italian. Young Ouvaliev was in charge of the Italian-language broadcasts.

“This radio was absolutely incredible”, Petar Ouvaliev once told Radio Bulgaria. “It saw the light of day to convince us that it stood at the very center of the expanse and so borders started to collapse as our voices took off. We were young guys, somewhat not fully hatched birdies, but we spoke up to somebody beyond. While the world would stubbornly break up to produce enemies, the radio waves jumped over the trenches of hatred. The radio taught us how not to hate…”

„We were aware that the genuine ambassadors of the country were ordinary and extraordinary Bulgarians abroad and they were head and shoulders above officials. By saying extraordinary Bulgarians I should like to bring back to life a café, Stephanie in Munich where Dechko Uzunov, Bencho Obreshkov, Elisaveta Bagryana, Nikolay Marangozov, Konstantin Garnev and God knows who besides, mixed with Germans. We talked about them not to keep an abstract national sentiment but rather to keep up the day-to-day cultural self-confidence of Bulgarians.”

Showing a remarkable sense of humor, Petar Ouvaliev once described himself as “one of the delinquents” who were the first to address foreign radio audiences.

„We are talking about heroic times when the entire radio occupied 4-5 rooms. It had little money but its boss was a man with an incredible imagination, Sirak Skitnik, artist, writer, critic, and how very amazing, a good manager. The international broadcasts were launched because it had crossed his mind that other services were paying to literate Bulgarian boys to translate news for the needs of the Bulgarian Ministry of Foreign Affairs, the Palace and the press. Why not broadcast the news then once they had been translated? And so, there was the original selection of the guys who had to read the news in these languages. George Milchev, later a journalist, was reading the French language news. Ivan Dorev, a son to a German mother, was reading the news in German. I was reading the news in Italian. The situation with English was a bit curious: the presenter spoke with a lisp. Well, this did not disturb Sirak at all – he had his vivid imagination at hand. He thought of a Bulgarian who planned to become an opera singer – Mihail Hadzhimishev. In fact, he became an opera stage-director. He was the first to present the news in English and we went on like that. It was absolutely nice working there.”

Gradually, foreign language broadcasts expanded to include apart from news and current affairs, reports from cultural events in the country, essays and even translations of Bulgarian poetry.

“I myself have long experience translating for the Radio, phonetically”, Petar Ouvaliev said, “for instance, poems by Elisaveta Bagryana. I have recited stanzas from her poems in Bulgarian, French and Italian. In this case what matters most is to keep the rhythm. The job of a translator is to span a bridge, taking us from one culture to another.”