As every year, summer in Rome ushers in the  Bulgarian film festival organized, once again, by actress Zhana Yakovleva and the entire team she is head of at the Bulgarian cultural institute in the capital of Italy. The festival – which opens today and will run until 30 June – will interest all people who appreciate Bulgarian films and culture.

The location is emblematic - Casa del Cinema in the gardens of the elegant Villa Borghese:

“With every passing year we meet more and more people interested in Bulgarian cinema, people who appreciate the work of Bulgarian filmmakers,” Zhana Yakovleva says. “A great many are themselves filmmakers – actors, producers, directors, some of them have worked in Bulgaria, others are hoping to work in Bulgaria in future. They all come because they are interested, and our meetings with them are fascinating - once the screenings are over and Villa Borghese grows quiet we sit down in the gardens outside, talking about everything  connected with cinema, about new co-productions.”

The 12th edition of the Bulgarian film festival in Rome will, as always, focus on the best of contemporary Bulgarian cinematography. The audience will be able to watch five feature films, three documentaries and one TV serial.

“As always we have a huge bouquet of guests,” Zhana Yakovleva says. “Starting with day one – 27 June – when Milko Lazarov will present his film Ága, the film which put a beautiful ending to the Berlin film festival. Then there are our colleagues who created “A picture with Yuki” – scriptwriter Dimitar Stoianovich, director Lachezar Avramov, producer Viktor Chouchkov and, most of all the star - Rushi Vidinliev.

The bad boys of Bulgarian cinema, as we like to call them – Marian Valev and Asen Blatechki whom we shall be presenting with their directorial debuts. Another one of our guests is young actress Lyuba Basheva who stars in Marian Valev’s “Bad girl. And on the last night of the festival – Teodora Duhovnikova with “Bubblegum”, we shall also see her in part 1 of the series “Devils’ throat” – to my mind the show that we can really be proud to present in Italy.”

The European capital of culture, Plovdiv, will also be presented at the festival in Rome from June 27 to 30, with documentaries dedicated to two outstanding figures from Bulgaria’s second biggest city – opera singer Sonya Yoncheva and film director Ivan Andonov. “The audience will also be able to see a film about one of the first Bulgarian authors to have had works of his translated in Italy – Yordan Radichkov,” says Zhana Yakovleva and adds:

“Taking a look back through the years, the step we have taken really is a big stride. Of course, I would like to see even more being done because I think that Bulgarian culture has not yet taken its due place in Europe or in the world. Being Bulgarian but living abroad for quite some time I can see the major achievements clearly and I think Bulgaria really should feel proud of its men and women of culture, because every year we reach even higher.”

The Bulgarian cultural institute in Rome is preparing, jointly with the Pancho Vladigerov museum house in Sofia, a concert dedicated to the 120th anniversary since the birth of composer Pancho Vladigerov, dubbed the patriarch of Bulgarian music. The concert is planned for 5 July and will feature performances by Bulgarian pianist Ivan Donchev who lives in Italy.

In the autumn various cultural events will mark the 140th anniversary of the establishment of diplomatic relations between Bulgaria and Italy. 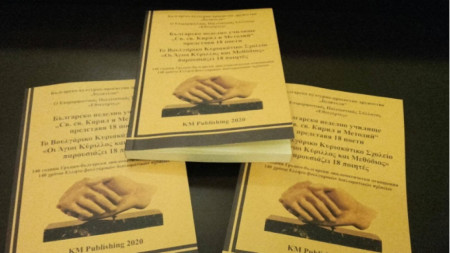