GERB: The president is politically responsible for the clashes

The ruling GERB party has accused President Rumen Radev of the mass riots in front of the Ministerial Council last night during which three police officers were injured and nearly 20 demonstrators were arrested.

"The political responsibility for last night's clashes and acts of vandalism lies with President Rumen Radev," GERB party officials said at an emergency morning briefing.
MP Toma Bikov denied that GERB supporters, who in turn organized a counter-protest in defense of the government, had been brought under escort to the protests. He also said that there were paid provocateurs who were turned into a background of the strong-arm squads affiliated with the businessman Vasil Bozhkov hiding in Dubai.
"We will not allow a civil war, even if we have a chance to win it," Deputy Prime Minister Tomislav Donchev concluded.
Radio Bulgaria News    anti-government protests clashes GERB protests Rumen Radev Vasil Bozhkov 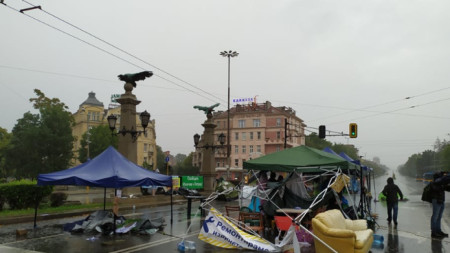