Bulgarian narrow-gauge railway turned into “gallery on wheels” for Christmas 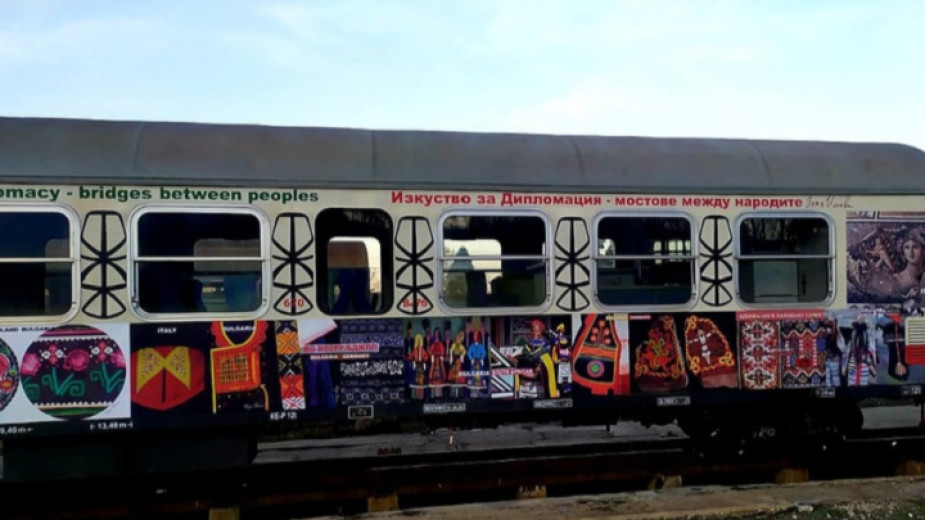 Several milestone anniversaries in Bulgaria’s public transport was what provoked talented artist Petya Ilieva to present, to the Bulgarian public, the cultures of different countries, their art, traditions, festivals and historical events. Two public transport vehicles “dressed up” in an unorthodox way can already be seen in the streets of Sofia, as part of the Art4Diplomacy annual initiative. At the end of the European Year of Rail, the only functioning narrow-gauge line in Bulgaria was turned into “a gallery on wheels”.

“The idea came to me in Match when I saw the train with its four green railcars, and immediately, in my mind’s eye I saw it as a brilliantly coloured fairytale that will rivet the attention of the people who see it, and bring a smile to their faces,” Petya Ilieva says. “Together with the diplomatic missions of 19 countries we painted and assembled the display so asto acquaint the local people and tourists with elements from the cultures of countries near and far and make a comparison with Bulgaria.” It is 100 years in 2021 since the decision was made, and the ground-breaking ceremony took place of the only remaining narrow-gauge railway in Bulgaria, and 95 years since it started functioning. As it traverses three mountains – the Rhodopes, Rila and Pirin – the length of the railway track is 125 kms. The line starts at the lowest-altitude train station, Septemvri, to reach the highest-altitude station in the Balkans, Avramovo, (1,267 m.) which commands breathtaking views of the Rhodopes. Because of the landscape, the scenic line has been dubbed the Balkan Transalpin.

The idea to paint the mountain train was embraced by the embassies of Finland, USA, Azerbaijan, Poland, Argentina, Ireland, Kosovo, Portugal, Morocco, Indonesia, Germany, Italy, Denmark, South Africa, Austria, Switzerland, Spain, Moldova and Israel. For six of them this is the first time they are taking part in any of Petya Ilieva’s initiatives:

“Denmark presents the Jelling runestones (a UNESCO monument), the history of the first Viking king who adopted Christianity, and a mythical creature from those times.

The “gallery on wheels” presents a collage of singers from South Africa in traditional dress, as well as singers from the Rhodope region. Israel – a 3rd century mosaic from a Roman villa in Zippori, the Mona Lisa of Galilee, Argentina – the traditional poncho, with a pattern that is very reminiscent of our own carpets.” “The message this initiative conveys is the same as the message of Art4Diplomacyas a whole – there are more things that make all people, all nations the same than there are that makes us different, and in these differences we should see the charm, not any conflicts or clashes, we should look for the national spirit,” Petya Ilieva says. The paintings on the narrow-gauge train can be seen until 7 April, 2022.

Bulgaria is in 46 th position in the list of most Googled countries in Google Street View for 2021. Top of the list is Indonesia, followed by USA, Japan, Mexico and Brazil. The Maldives are in the 100 th , or last position. Google..