The second edition of the Quartet Intensive Festival - fun, useful and unusual 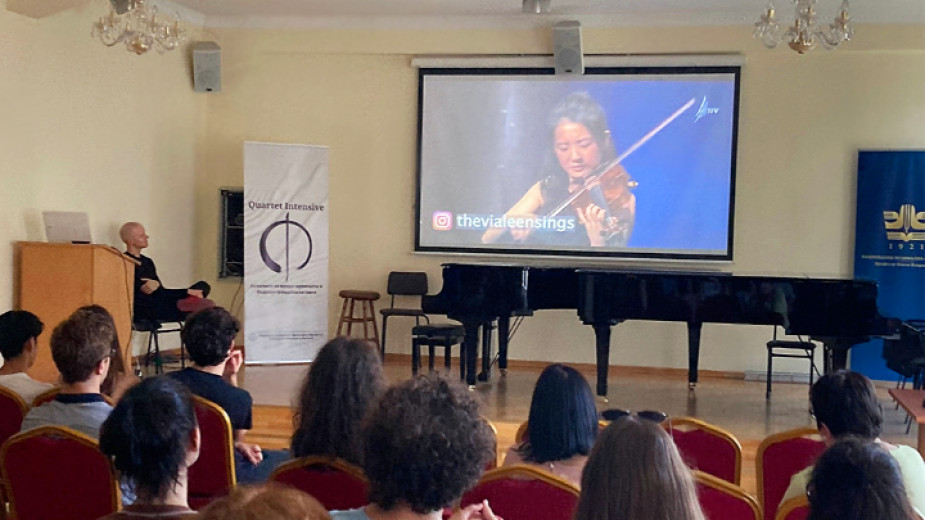 "How to guide young talents" was the topic that was discussed by parents and students on July 8, in one of the halls of the Pancho Vladigerov National Music Academy in Sofia. The talk was part of the program of the Quartet Intensive summer chamber music festival for young Bulgarian instrumentalists, which is being held for the second year in a row in Sofia from July 5 to 14. Blagorodna Taneva – one of the most prominent violin teachers in Bulgaria, as well as Pavlina Dokovska, chair of the Piano Department at Mannes School of Music in New York City since 1998, participated in the discussion. One of the topic was early childhood activities - why it's good for kids to be involved in music, especially in today's economic and cultural climate, and what the different crossroads they can reach in their development and how to help in making the right decisions." The program of the Quartet Intensive festival features no less interesting and useful presentations dedicated to current issues - "How to win, love and keep your position in an orchestra" (when it comes to orchestras in Europe, Asia, the USA, Latin America, Australia). And also ‎”How to efficiently rehearse classical music in chamber ensembles”, etc. ‎Of course, the main emphasis is on acquiring practical skills. Most of the young people also participated in the festival in 2021, so the task this time is different.‎

ˮLast year, each ensemble prepared a quartet, now separate parts of different works are performed.The closing concert is on July 13 at 6 p.m. at the National Music Academy. We have conceived it in two parts. The students, who last year proved to themselves and the audience that they could prepare an entire quartet in just nine days, will now be exposed to more influences. Each chamber ensemble will perform parts of works by Mozart, Puccini, Webern, etc.''

Classes with most of the foreign teachers involved in the Quartet Intensive are conducted online, also some have arrived in Sofia and are rehearsing intensely with the pupils and students. ‎

“One of them is Ryo Usami - a violinist, but he also plays the viola here. ‎Ryo is part of the US Marine Chamber Orchestra and constantly ‎plays at various official receptions, etc. at the White House. The other instructor came from Los Angeles - the cellist Michael Kaufman, a professor at the Colburn Community School of Performing Arts. Michael has played for some of Hollywood's highest-grossing productions in recent years, even now he is to record with John Williams. We have also planned a discussion on how to study today to be prepared for the music careers of the future, which may be completely different”, Moni Simeonov explains.

Moni Simeonov himself teaches in similar academies all over the world and is in constant contact with young musicians of all nationalities. What distinguishes Bulgarian young people? Hi