The ancient town of Nessebar is located on a picturesque peninsula in the Black Sea. It is considered one of the oldest towns in Europe, founded 3,200 years ago.

Remnants of old fortress walls from the Roman times and the Middle Ages, Byzantine and Bulgarian Churches, Renaissance houses from the 18th and the 19th century have been preserved in the town. During its existence, Nessebar had about 40 churches.

The tomb dates back to the beginning of the 3st Century BC. Its decoration is in the spirit of the Hellenic culture, yet refracted through the beliefs of the Thracian tribe Gettae. The Sveshtari tomb is entirely covered by the mound and features sculpted decorations that are to be seen in no other Thracian tomb. There are female figures carved on the walls of the burial chamber, the resting place of the ruler of the Gettae. The figures are in high relief with colored hair and clothing that are different from one another. The burial chamber features a scene of the heroisation of the Thracian ruler.

The most famous monastery in Bulgaria was founded in the first half of the 10th century when monk St. John of Rila, the heavenly patron of the Bulgarian people, chose retreat as a way to unite with God. During the Ottoman Rule (15th-19th century), the monastery was a spiritual and cultural center of Bulgarian national consciousness. After the liberation of Bulgaria from the Ottoman Rule, the spiritual life in the monastery continued to flourish and the relics of St. John of Rila grand healing and comfort to those who approach them with faith.

A group of small churches, chapels and hermitage cells were hewn out of solid rock at a different altitude on the rocky banks of Rusenski Lom River. Between the 10th and the 14th century they turned the Rusenski Lom Valley into a spiritual center. The monastery complex is a center of hesychasm in the Bulgarian lands in the 14th century. The Church of the Holy Virgin dates back to the 13th century. Its unique frescoes attract thousands of tourists from across the globe.

The monument dates back to the 4th-3rd century BC. It comprises a narrow corridor and a round burial chamber, both decorated with murals representing Thracian burial rituals. The paintings are Bulgaria’s best-preserved artistic masterpieces from the Hellenistic period.

The mysterious rock relief is carved on a high vertical rock near the present-day town of Shumen. It is the only relief of its kind, having no parallel in Europe. It is part of the Madara historical and archaeological reserve. The Madara Horseman, depicting a figure of a horseman triumphing over a lion, is an exceptional work of art. The inscription around the relief chronicle events in the reign of famous Khans.

The Boyana Church is located at the foot of Vitosha Mountain. A total of 89 scenes and 240 human images are depicted on the walls of the Boyana church. The frescoes were painted by an unknown and very talented artist in 1259. They are fundamentally different from the scholastic, lifeless figures of the Byzantine art and precede the frescoes of the father of Renaissance painting – Giotto di Bondone.

An old legend has it that all winds are born on Christmas Еve and baptized before Epiphany. In Bulgarian folklore, winds are classified first according to the four cardinal directions. The wind coming from the north is called Northerner, or..

370 years since the printing of the first Bulgarian book "Abagar"

Bulgaria marks 370 years since the publication of the first Bulgarian printed book - the collection of prayers "Abagar" . The book consists of five large sheets in the form of scrolls, on which short apocryphal prayers are printed  . The sheets.. 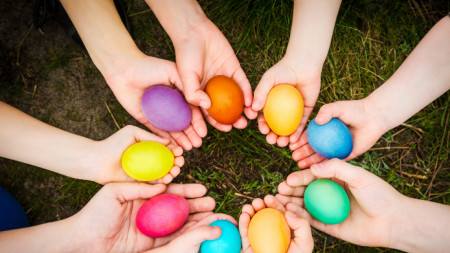 Why is the first Easter egg always red?

Tradition says that Easter eggs must be painted on Maundy Thursday by the oldest woman in the family. Wealthier households would dye 500-600 eggs – for all members of the family, for relatives and guests, for paupers and for travelers. Dyes..

An old legend has it that all winds are born on Christmas Еve and baptized before Epiphany. In Bulgarian folklore, winds are classified first..